A new study from comScore showed that the slow adoption rate of digital wallets may have something to do with a lack of awareness — only 51% of consumers in the U.S. were aware of digital wallets, aside from PayPal, which had a 72% awareness rate, according to the study. 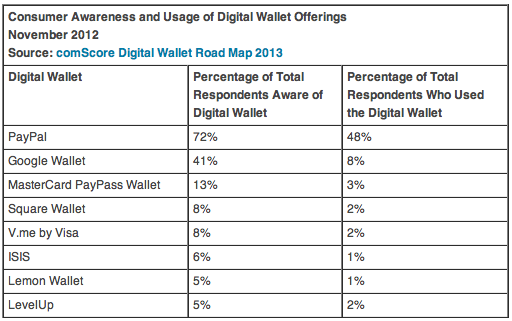 Andrea Jacobs, comScore Payments Practice Leader, said for the press release that the low adoption rates could be attributed to multiple factors, such as low awareness and a lack of understanding of the benefits, from the consumer as well as the retailer side. She also noted that this isn’t the first time we’ve experienced steep barriers to adoption in the financial services industry: “There was a time when consumers were reluctant to use ATMs for similar reasons, and, today, look at how far we’ve come since the 1970s and 1980s.”

There are some indications of a bright future for digital wallets, however, when all aspects of the ecosystem are in place. Kevin Fitchard reports at GigaOm that Isis chief sales officer Jim Stapleton says their wallet trial in Salt Lake City “is producing positive results from both consumers and merchants,” with users paying with the wallet five or more times per week.

Stapleton wouldn’t specify the number of users Isis has at this point, Fitchard reports, but he said “the typical Utah Isis customer follows five different merchants using the wallet’s loyalty card and coupon features, and a customer who signs up for a business’s loyalty program tends to visit that business twice as often as a regular customer.”

“Social commerce” is driving growth in US ecommerce market

Reports this week showed global ecommerce sales topping the $1 trillion mark. Though the U.S. leads the world in ecommerce sales, ecommerce represents a “scant 4% of American retail sales,” according to Business Insider’s Alex Cocotas’ research. He notes, though, that the channel is “growing faster than its offline counterparts” and highlights the major drivers: mobile commerce and social media. Cocotas points to such success stories as “social commerce” sites ShoeDazzle and Fab.

According to Jim Edwards at Business Insider, Facebook advertisers can attest to the power of “social commerce.” Edwards looks at Facebook’s mobile app install ads, which on first blush appeared to be geared at mobile game and app developers. “But several of Facebook’s big advertising clients who have used the ads in Q4 indicated that the ads can be used to develop e-commerce on Facebook,” Edwards writes, “turning the social network into a mobile shopping and sales device.”

Edwards explains that the apps are more valuable to advertisers than ad impressions because a consumer with an app is likely to use it more than once, resulting in a “‘lifetime’ of revenue” as opposed to a one-off sale. After testing the ad unit, Edwards reports, Fab.com CEO Jason Goldberg said Fab’s shopping app was “[f]ive times more effective than any other mobile download channel that we’ve used.”