Financial analytics as a service

Analytic services are tailoring their solutions for specific problems and domains

In relatively short order Amazon’s internal computing services has become the world’s most successful cloud computing platform. Conceived in 2003 and launched in 2006, AWS grew quickly and is now the largest web hosting company in the world. With the recent addition of Kinesis (for stream processing), AWS continues to add services and features that make it an attractive platform for many enterprises.

A few other companies have followed a similar playbook: technology investments that benefit a firm’s core business, is leased out to other companies, some of whom may operate in the same industry. An important (but not well-known) example comes from finance. A widely used service provides users with clean, curated data sets and sophisticated algorithms with which to analyze them. It turns out that the world’s largest asset manager makes its investment and risk management systems available to over 150 pension funds, banks, and other institutions. In addition to the $4 trillion managed by BlackRock, the company’s Aladdin Investment Management system is used to manage1 $11 trillion in additional assets from external managers. 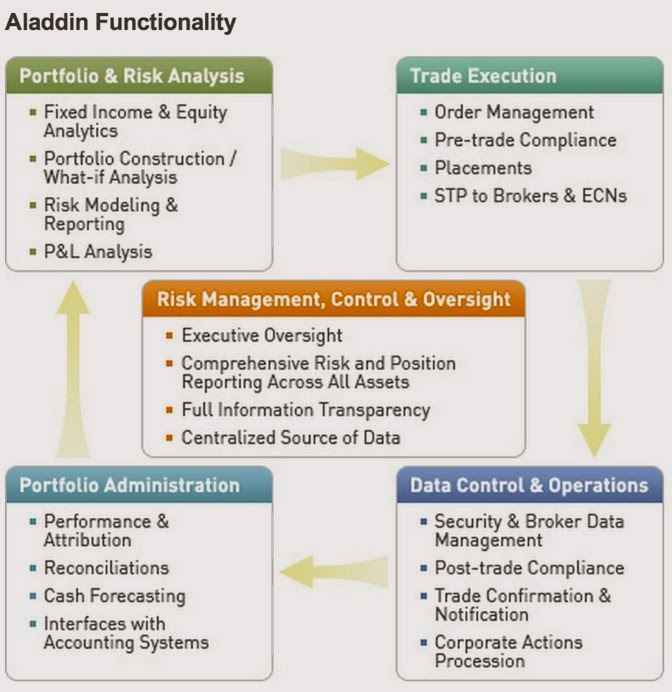 Just as AWS has been adopted by e-commerce companies, some of Aladdin’s users are BlackRock’s peers in the asset-management industry. In the case of Aladdin2, asset managers have come to value it’s collection3 of high-quality historical data and analytics (including Monte-Carlo simulations and stress tests). In recent years, the amount of assets that rely on Aladdin grew by about $1 trillion per year. To put these numbers in context, the 6,000 computers that comprise Aladdin keep an eye on about “7% of the world’s $225 trillion of financial assets”. About 17,000 traders worldwide have access to Aladdin.

As more firms come to rely on these massive services, errors and failures that would have been limited to their original users (Amazon and BlackRock) get propagated to many others. Aladdin’s creator BlackRock, fared relatively well in the recent financial crisis, but that hasn’t assuaged concerns over the amount of assets that rely on its investment management systems. Financial managers are particularly sensitive to accusations of having too much faith4 in models. Wary of letting their crisis management skills erode due to over-reliance on an external system, many other financial firms choose to retain in-house tools and capabilities. Even BlackRock encourages Aladdin users to think of it as a supplement to their other financial management systems and processes (e.g. Bloomberg or other tools & services).

As much as I admire general purpose tools, they can often across as solutions in search of problems. Along these lines, I’ve recently talked with quite a few analytics startup that have had to tailor their solutions for specific domains. In many cases special tools for analyzing, working and integrating with industry-specific data sources needed to be built. Aladdin’s evolution from an in-house investment management system to a widely used service, is an interesting example of a domain specific analytic service (curated industry data + domain specific models + accompanying tools & services). If you know of similar services in other industries, please leave a comment on this post.

(1) According to a recent article in the Economist: “The firm makes its facilities available in whole or in part to managers looking after $11 trillion more, a tally that has recently been growing by about $1 trillion a year. All told, Aladdin keeps its eyes on almost 7% of the world’s $225 trillion of financial assets.”
(2) Officially launched in the year 2000, the name Aladdin was coined by a customer. It stands for Asset Liability and Debt and Derivative Investment Network.
(3) Having worked as a hedge fund quant I can attest to the importance of having ongoing access to both: clean data and efficient algorithms. OTOH, I prefer to know how exactly those algorithms work – reliance on “black boxes” make me uncomfortable.
(4) This specifically means not understanding the mechanics and limitations of the “black box algorithms” they employ. Even the CEO of BlackRock remarked in a recent Economist article: “If you believe models are going to be right, you’re going to be wrong.”