Pursuing adoption of free and open source software in governments

Free and open source software creates a natural — and even necessary — fit with government. I joined a panel this past weekend at the Free Software Foundation conference LibrePlanet on this topic and have covered it previously in a journal article and talk. Our panel focused on barriers to its adoption and steps that free software advocates could take to reach out to government agencies.

LibrePlanet itself is a unique conference: a techfest with mission — an entirely serious, feasible exploration of a world that could be different. Participants constantly ask: how can we replace the current computing environment of locked-down systems, opaque interfaces, intrusive advertising-dominated services, and expensive communications systems with those that are open and free? I’ll report a bit on this unusual gathering after talking about government.

Overcoming barriers to the adoption of free software in government

The LibrePlanet panel on government adoption was chaired by MIT professor and community activist Ezra Glenn; I participated along with software developer and O’Reilly author Karl Fogel and a lot of impressive audience members. 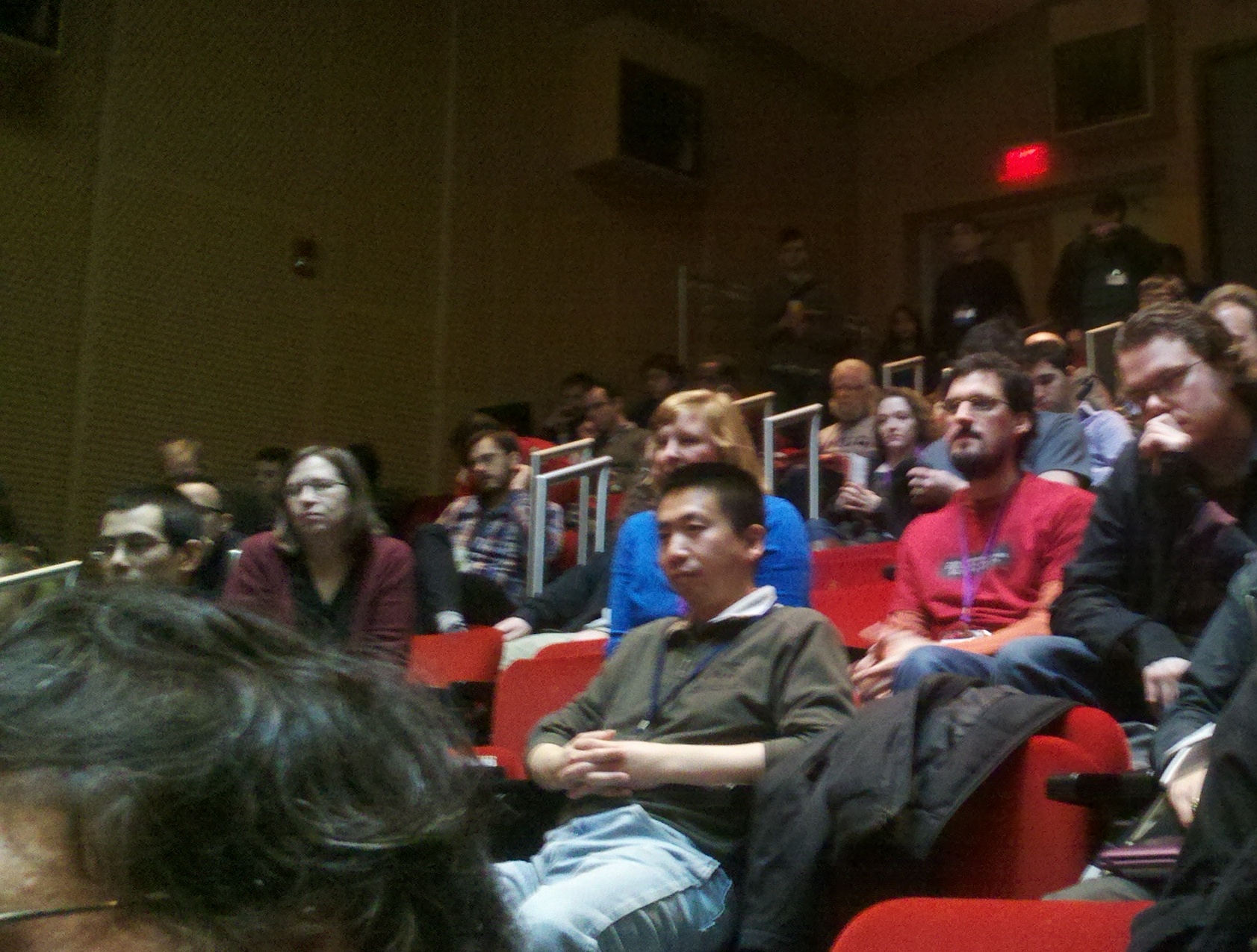 Audience for a keynote the previous day.

Reasons for government agencies to adopt free and open source software have been aired repeatedly, including my article mentioned earlier. A few justifications include:

Access
Document formats must allow citizens to read and submit documents without purchasing expensive tools.
Participation
Free software allows outside developers to comment and contribute.
Public ownership
Whatever tools are developed or purchased by the government should belong to the public, as long as no security issues are involved.
Archiving
Proprietary formats can be abandoned by their vendors after only two or three years.
Transparency
Free software allows the public to trust that the tools are accurate and have no security flaws.
Competition
The government has an interest in avoiding lock-in and ensuring that software can be maintained or replaced.
Cost
In the long run, an agency can save a lot of money by investing in programming or system administration skills, or hiring a firm to maintain the free software.

Obviously, though, government agencies haven’t gotten the memo. I’m not just talking metaphorically; there have been plenty of memos urging the use of open source, ranging from the US Department of Defense to laws passed in a number of countries.

And a lot of progress has taken place. Munich, famously, has switched its desktops to GNU/Linux and OpenOffice.org — but the process took 13 years. Elsewhere in Europe, Spain has been making strides, and the UK promises to switch. In Latin America, Brazil has made the most progress. Many countries that could benefit greatly from using free software — and have even made commitments to do so — are held back by a lack of IT staff with the expertise to do so.

Procurement processes
General consensus among knowledgeable software programmers holds that age-old rules for procurement shouldn’t be tossed out, but could be tweaked to admit bids from more small businesses that want to avoid the bureaucracy of registering with the government and answering Requests for Proposals (RFPs).
Habits of passivity
Government managers are well aware of how little they understand the software development process — in fact, if you ask them what they would need to adopt more open source software, they rarely come up with useful answers. They prefer to hand all development and maintenance to an outside firm, which takes full advantage of this to isolate agencies from one another and lock in expensive rates.
Lack of knowledgeable IT staff
The government managers have reason to keep hands off free software. One LibrePlanet audience member reported that he installed a good deal of free software at his agency, but that when he left, they could not find knowledgeable IT hires to take over. Bit by bit, the free software was replaced with proprietary products known to the new staff.
Political pressure
The urge to support proprietary companies doesn’t just come from their sales people or lobbyists. Buying software, like other products, is seen by politicians as a way of ensuring that jobs remain in their communities.
Lack of information
Free software is rarely backed by a marketing and sales organization, and even if managers have the initiative to go look for the software, they don’t know how to evaluate its maturity and readiness.

Thoroughgoing change in the area of software requires managers to have a certain consciousness at a higher level: they need to assert control over their missions and adopt agile workflows. That will inevitably spawn a desire for more control over the software that carries out these missions. A posting by Matthew Burton of the Consumer Financial Protection Bureau shows that radical redirections like this are possible.

In the meantime, here are some ideas that the panelists and audience came up with:

Tweaking procurement
If projects can be kept cheap — as Code for America does using grants and other stratagems — they don’t have to navigate the procurement process. Hackathons and challenges can also produce results — but they have a number of limitations, particularly the difficulty developers have in understanding the requirements of the people they want to serve. Some agencies can also bypass procurement by forming partnerships with community groups who produce the software. Finally, a possibly useful model is to take a cut of income from a project instead of charging the government for it.
Education
Managers have heard of open source software by now — great progress from just a few years ago — and are curious about it. On the production side, we need to help them see the benefits of releasing code, and how to monitor their software vendors to make sure the code is really usable. On the consumption side, we need to teach them maturity models and connect them to strong development projects.
Sharing
Most governments have familiar tasks that can be met by the same software base, but end up paying to reinvent (or just reinstall) the wheel. Code for America started a peer network to encourage managers to talk to one another about solutions. The Brazilian government has started a Public Software Portal. The European Union has an open source database and the US federal government has posted a list of government software released as open source.

Although I can’t comprehensively cover the rest of last weekend’s conference (much of which I had to skip), I would be remiss to end the posting without some mention of the other wonderful things that occurred.

LibrePlanet examines our modern technological society and finds much to criticize. But it is not a crabfest for frustrated policy wonks: these people are making new tools in hardware, software, and networking — tools that may well become as mainstream as GNU/Linux is already in data centers, cell phones, and stand-alone computer systems. 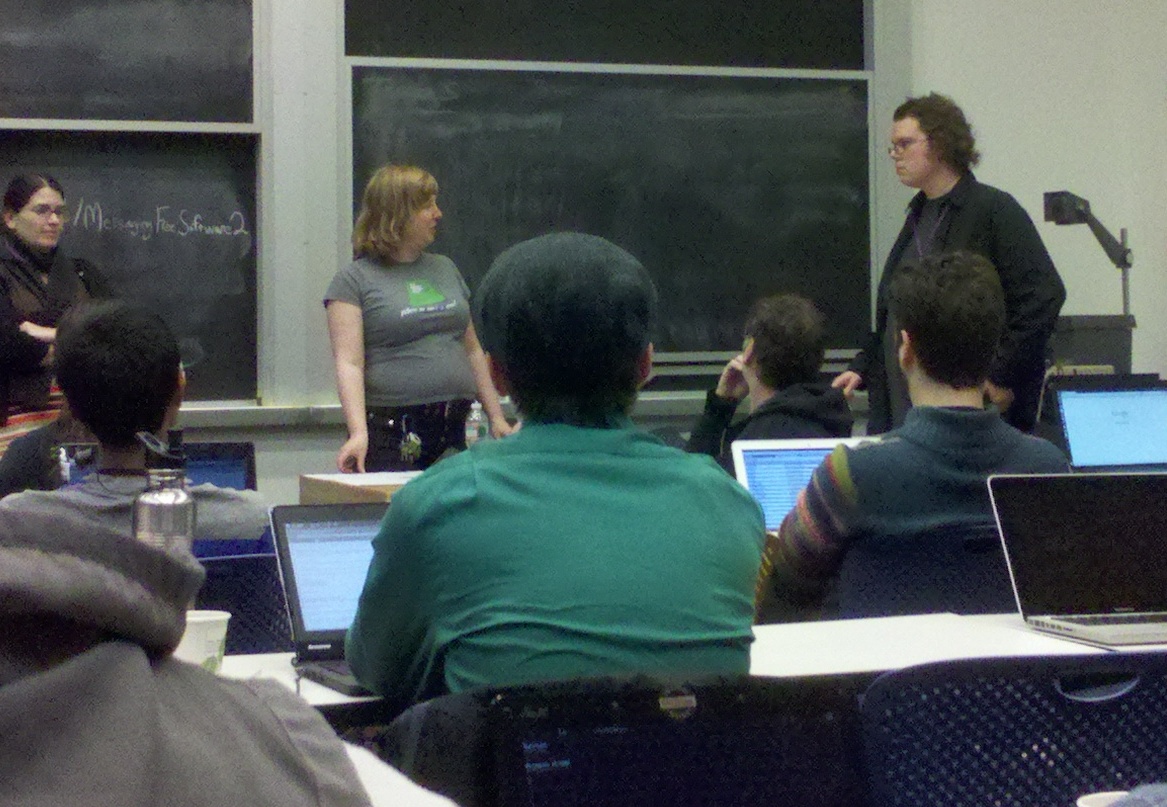 Many observations by the FSF and its followers resonate as familiar complaints to everyday computer users. Why can’t we play a DVD we bought in Europe on a player we bought in the US? Why do we need laws passed before we can move our cell phones to a competing network?

But many free software insights investigate practices that are much more hidden. And to break away from them requires a lot more effort and sacrifice than most computer and phone users are willing to undertake. Doing so is also technically daunting — a problem cited repeatedly at the conference.

The revelations of Edward Snowden hung heavily over the show, revelations that kept unfolding even as the conference was taking place. I have written before about some of the infrastructure elements that facilitate government snooping, and LibrePlanet attendees are hyper-sensitive to things that tie us to exploitative and intrusive computing platforms. For instance:

These discussions are challenging, both intellectually and morally. It’s the kind of thinking that appeals to me, as I express in my series What are the chances for a free software cloud? The conference has grown impressively, attracting well over 300 attendees this weekend plus about 100 remote viewers for each live stream.

Most of the conference was held in four tracks, with an informal track out in the lobby where Eben Moglen of the Software Freedom Law Center took an inconspicuous spot and held forth for a couple hours to the rapt attention of five, then 10, then 15, then 20 listeners.

In her keynote, outgoing Wikimedia executive directory Sue Gardner said the free software and culture movements need to be more diverse and do better outreach, with more members who know how to raise funds and more people who understand media and PR. Two activities readers may be interested in are forums on messaging, held in 2013 and at this conference, and a Reset the Net protest to be held on June 5 of this year.