Salary insights from more than 800 data professionals reveal a correlation to skills and tools. 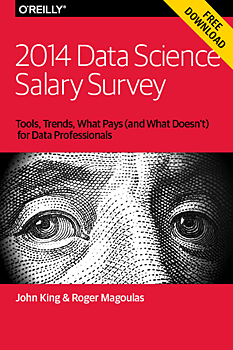 Data is growing: Whether in terms of data-driven applications, the diversity of tools or the actual quantities of data we collect and process, the data space is characterized by expansion. The excitement around data has been tempered in some circles — the first two query completion suggestions for a Google search of “Is data science” are “dead” and “a fad” — but from a practitioner’s perspective, things are looking quite rosy.

In the results of this year’s O’Reilly Media Data Science Salary Survey, we found a median total salary of $98k ($144k for US respondents only). The 816 data professionals in the survey included engineers, analysts, entrepreneurs, and managers (although almost everyone had some technical component in their role).

Why the high salaries? While the demand for data applications has increased rapidly, the number of people who set up the systems and perform advanced analytics has increased much more slowly. Newer tools such as Hadoop and Spark should have even fewer expert users, and correspondingly we found that users of these tools have particularly high salaries.

Whether or not it is wise to spend time learning a tool because it correlates with high salaries is a legitimate question. For someone entering the data space, a good approach would be to focus on a combination of those tools that are established (the ones with the highest usage rates) and the ones associated with the highest salaries.

For a data veteran, it’s trickier. The development of tools is so rapid that, in many cases, by the time a shop finishes the implementation of a new system, the system is already outdated. It simply doesn’t make sense for everyone to implement every new tool when it comes out. On the other hand, you don’t want to fall far behind the cutting edge.

We hope that the information about tool usage — which are most popular, which appear to contribute to high salaries, and which are used together — will help data professionals make informed choices about how to invest their time in learning new tools and skills.

Take a look at the report, and if you can spare 10 minutes, please share your own story in the new survey.