Proximity is all about nearness: knowing that someone or something is near to something else. In particular, when we focus on mobile devices like phones, there are a number of ways to figure out if a device is near to something else of interest. A key approach is to use a type of short-range beacon as a “proximity signal” — the mobile device detects a beacon of some kind, and then looks up information about that beacon in some local or online store.

The Bluetooth Low Energy (BLE) standard, which was designed from scratch to enable fast, efficient use cases for Bluetooth in the world of sensors and the Internet of Things (IoT), has built-in support for proximity.

Using BLE, manufacturers can make beacons that can run for years on batteries (and so don’t require a fixed power source) and can be detected by most of today’s mobile platforms without requiring the overhead of a real connection to be formed (so they’re fast to connect and, therefore, efficient in conserving time and battery). This, combined with the broad adoption of BLE in all major categories of mobile device (phone, tablet, laptop), paves the way for mass-market use cases of proximity.

Bluetooth SIG publishes and manages the Bluetooth standard, which includes the standard for BLE. Companies can join the SIG and engage in a process that allows them to create chips that implement the Bluetooth Specification in their products, including BLE. Companies that make BLE chips include Cambridge Silicon Radio, Texas Instruments, Broadcom, Nordic, Bluegiga, and Gimbal.

In turn, other companies incorporate these chips in to their products. Most of the major beacon manufacturers use one of the chips from the manufacturers above to power the core of their beacons.

A wide variety of hardware manufacturers are now making standalone beacons, or embedding beacons into other products, such as wearable devices, lightbulbs, cars, and so on.

How do BLE beacons work?

At its simplest, a beacon is set to transmit a tiny parcel of information some number of times per second, so that any suitably equipped device nearby (such as a phone) can detect it. The beacon’s repetitive transmission is referred to as “advertising,” and there is a structure for the data that must be transmitted, which is defined in the BLE standard. An application on a mobile device can then detect this parcel of information, unpack it, and use it in whatever way it likes.

Beacons are used by placing them anywhere where you might wish to either trigger some form of action in a mobile application, or have that application log the fact that it came near to the beacon (analogous to a website “seeing” a cookie on your computer and recording that you visited). The classic example that’s always used is about shopping. 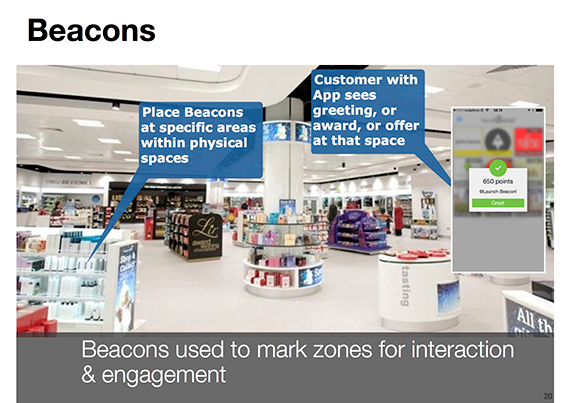 So far, we’ve discussed BLE. So, where do Apple and iBeacon fit in? With iBeacon, Apple built on top of the standard and layered some conventions over BLE.

From a hardware perspective, in order to be an iBeacon, a BLE beacon must advertise at a specific interval (100ms, or 10 times per second) and abide by certain restrictions regarding connections (it advertises only, so it cannot support full connections). It also provides some further structure about the data that is transmitted by the beacon (see below).

Manufacturers are free to build BLE beacons that comply with the Apple iBeacon conventions, subject to agreeing to some specific terms with Apple.

On the software side, Apple extended their location services within iOS, in two ways:

The upshot is that applications on iOS can now be made “iBeacon aware” — and Apple lends a helping hand by baking in some OS-level support to make that relatively simple to do. A developer can now think about interesting new options for their application to use beacons, most of which boil down to variants on the following:

If the user is this close to this Beacon, then do this.

Turns out, there’s a lot you can do with that pattern, which we will return to later.

Since Apple launched details around its iBeacon conventions and APIs, there has been a slew of manufacturers who’ve released iBeacon hardware and software. There’s a great report from AisleLabs covering many of the top standalone iBeacon manufacturers. 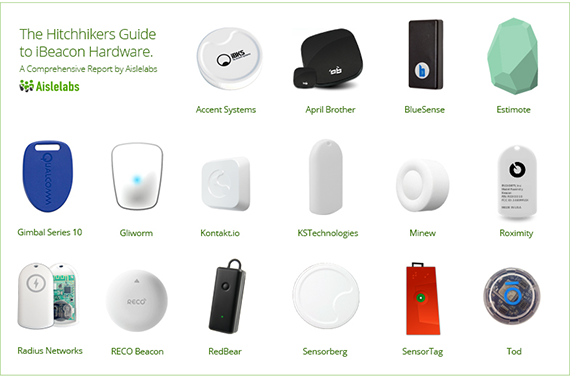 Apple mandates that the tiny parcel of information transmitted by an iBeacon contains some key things:

A proximity UUID is often used to identify a common group of iBeacons. For example, a museum might choose to use a specific UUID on all the beacons it deploys in its exhibition areas.

Major and minor codes are then often used to uniquely associate a beacon with a given location or area within a physical space.

On iOS (we’ll return to Android later), a given application can monitor (scan for) up to 20 proximity UUIDs. This means an application can register to be notified if a Beacon with a given UUID comes within range (or goes out of range) of the device.

The application can then use this data, often in tandem with a cloud service, to decide what action to take, if any, when the beacon is detected.

A rule of thumb for beacon range is anywhere up to around 10 meters or 30 feet. However, manufacturers can offer an option to vary this, by varying the transmit power of the beacon, and therefore varying the range of the radio signal. We’ve seen beacons with ranges up to 100 meters, but this is not typical. It’s best to assume that an off-the-shelf beacon has a range of around 30 feet.

In software, Apple helps identify how far you (the device) is from a beacon. When reporting this back to an app, it divides the distances of an iBeacon into four “chunks” of nearness: immediate, near, far and unknown. Note that these distances don’t have a specific meaning in feet or meters. Instead, they are relative — a beacon that is immediate is nearer than one that is near. The exact distance will depend on the signal strength of the radio, and some other calibrations. As a result, it’s best to use these carefully when thinking about how and when to use the range in applications and services. As a rule of thumb, we think about immediate being anything up to 2–3 feet, near being 3–10 feet, and far being around 10–20 feet. Unknown is then just that — something more than roughly 20 feet.

What are beacons used for?

At LocalSocial, we’ve helped customers deploy beacons used in a variety of scenarios, and across many different verticals. Before looking at some specific examples, let’s revisit what I said above about the common pattern for using proximity and beacons:

If the user is this close to this beacon, then do this.

The key to how we think about beacons is to think of them as one contextual signal (among many others) that we can use to help us understand a user’s context.

For example, we can tell that someone has arrived in a specific area, that they have stayed for a particular amount of time in that area, or that they recently left that area. Depending on the scenario, the first signal (arrived) might be a good point to send a greeting or welcome message, the second may be just a piece of data we choose to log to build a picture of dwell times, and the last might be a good time to ask for some feedback.

With our retail customers, we often use the analogy of eCommerce — think of beacons as helping to surface eCommerce-style data for real-world stores. Who visited? How long did they stay? When were they last here? What parts of the store did they visit? Beacons can help answer these questions by surfacing that data for real-world spaces, making it actionable. And there are many industries and verticals where this sort of data is incredibly useful.

iBeacon use cases: the story so far

A number of verticals have been quick out of the blocks to trial or deploy iBeacons in their consumer offerings. Here’s a sample of some real use cases: 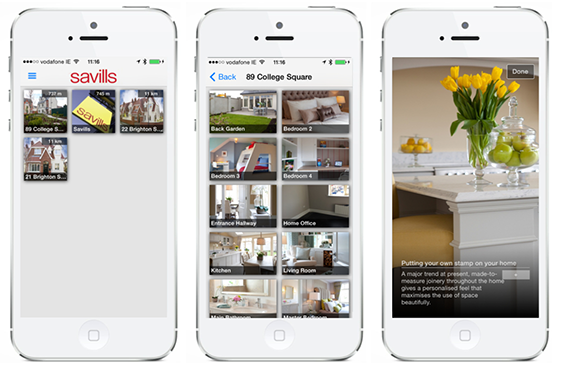 Savills beaconized show houses to provide a friction-free guide and to get critical dwell data. Image courtesy of LocalSocial.

I’ve omitted high-profile examples in sports (stadiums) and in finance (banking), but you get the idea: anywhere where a contextual signal of “nearness” might be useful, iBeacons have the potential to appear.

In all of the cases above, the beacons provide a way to elicit a tiny nugget of context (this user is currently this close to this thing) in real time, which an app, perhaps with some help from the cloud, can choose to act on in some way.

How are these solutions built?

Most of the above solutions work to a common pattern. In a follow-on post in this series, we’ll talk about some of the other approaches, but most have the following elements in common:

Finally, some things to consider 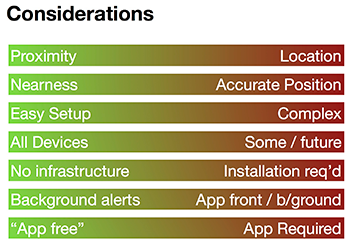 We will return to some of these points in the follow-on posts, but a few things worth highlighting:

In the next post in this series, we’ll examine alternatives to iBeacon from Google, Samsung, and others, and map out the plethora of startups in the beacosystem.

This post is part of our investigations into APIs for the Physical World and Interaction Design and Connected Devices.

Cropped image on article and category pages by Stinging Eyes on Flickr, used under a Creative Commons license.