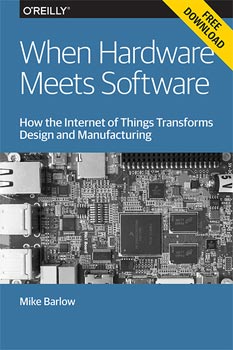 Hardware is “a cage,” says Huang, and good software developers learn to work within the constraints of the hardware. “When I work with programmers on new products, I take the first prototype, put it on the desk and I say, ‘Welcome to your new cage.’ That’s the reality. There’s a hard wall. But we try to build the cage big enough so there are options for programmers. A quad core Android phone with a gigabyte of memory is a pretty big cage. Sometimes when programmers feel constrained, they’re just being lazy. There’s always more than one way to skin a cat in the software world.” END_OF_DOCUMENT_TOKEN_TO_BE_REPLACED

Physical and virtual are blurring together

Key signals from hardware, software, manufacturing, and the Internet of Things.

This essay updates a November 2013 article. We’ve expanded it in light of the success of our first Solid conference in May 2014, where we tested many of these ideas, and the announcement of our next Solid conference in June 2015. In addition to this update, you can stay in the loop on the latest developments in the space through our weekly newsletter.

Real and virtual are crashing together. On one side is hardware that acts like software: IP-addressable, programmable with high-level procedural languages and APIs, able to be stitched into loosely coupled systems — the mashups of a new era. On the other is software that’s newly capable of dealing with the complex subtleties of the physical world — ingesting huge amounts of data, learning from it, and making decisions in real time.

The result is an entirely new medium that’s just beginning to emerge. We can see it in Ars Electronica Futurelab’s Spaxels, which are LED-equipped quadcopters that make up a drone swarm to render a three-dimensional pixel field; in Baxter, which layers emotive software onto an industrial robot so that anyone can operate it safely and efficiently; in OpenXC, which gives even hobbyist-level programmers access to the software in their cars; and in SmartThings, which ties web services to light switches.