A new app lets you make an elegant exit, Square hails a cab and iWallet gets closer.

Here are the commerce stories that caught my attention this week.

Tabbed Out connects check-ins with payment

For every one of us who’s ever had a hard time catching the server’s eye so we can make a hasty exit from the bar, here’s the app you’ve been waiting for. Tabbed Out (available on Android and iOS) lets you check in and open a tab at restaurants and bars. When you set up the app, you link your credit card to it, so checking in delivers that info to the merchant’s point-of-sale system. When you want to check out, you can do it on the app, even leaving the tip there instead of on the wet table. That’s good for the merchant: There’s no chance of getting walked out on, even if the patron leaves in a hurry or deletes the app. 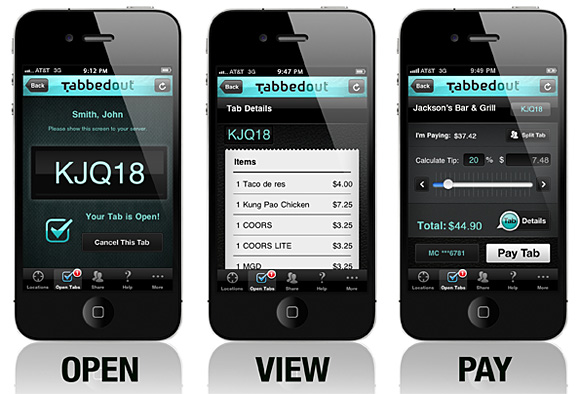 It’s also good for the patron: Not only does it allow you to flee when the urge strikes, but it might save you a trip back the next day. Every bar has a drawer full of abandoned credit cards, tabs opened by good-spirited folks early in the evening who, by the time they left, were too tipsy to remember to collect them on the way out. Do the same with Tabbed Out and the merchant can close the tab — and you don’t have to return to the bar the next day to pick up your plastic.

The app offers some of the usual benefits we’ve grown to expect from a mobile check-in app — allow it to know your location, and it will also tell you what’s nearby. Well, eventually it will. As of this week, it’s only available at 450 locations in 34 states. Starting this weekend, some of those locations (the ones in Austin, Texas) will begin accepting PayPal as a payment option, too. A spokesperson for Tabbed Out says the company plans to make the PayPal option part of its standard offerings as it continues to roll out nationwide. So, this is another foothold for PayPal in the real world: Now you can use it to charge supplies at Home Depot, then pay for that brew you buy to reward yourself at the end of the day. 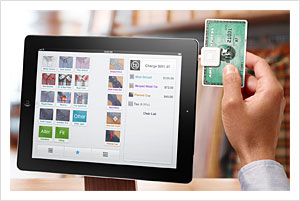 Square’s back in the news this week, with an upgraded cash register app (timed to coincide with the new iPad announcement) and more details on its rollout to New York City taxis.
The iPad cash register isn’t exactly new: Square has been pushing it for more than a year, and Cult Of Mac did a nice little round up of nifty iPad holders back in January 2011. But the company has relaunched the app and its integration with Card Case, the buyer’s app that lets you run a tab using just your name at Square-accepting retailers (if you can find one).

Bigger news may be that, as The New York Times reports, Square will begin a pilot program in 30 NYC taxi cabs, with iPads mounted where those little TVs are now. (They better bolt them in pretty good!) The big innovation here, at least for the rider, is that you can swipe your card anytime during the ride. Then just sign the screen with your finger and you can hop right out at your destination; no more waiting to sign a credit-card receipt. Cabbies get something out of it too — faster payments and a silent iPad instead of a noisy TV with looped audio.

Despite these innovations, anyone who’s been excited watching Square’s development has probably also felt the disappointment that goes along with not seeing it used … well, just about anywhere. Dan Frommer, the tech journalist who blogs his own news at SplatF, certainly feels that disappointment. Still, he’s enough of an enthusiast to review the company’s releases over the past year of its daily processing volumes. While they’re still a drop in the ocean compared to more visible options, like credit cards and even PayPal, Square seems to be headed in the right direction, and on a steepening curve that has reached $11 million a day. Considering the few businesses that show up on my Card Case app right now, that’s an impressive number of lattes, massages, and farm-fresh produce.

While the rest of the Apple-lovin’ world focused on the details of the new retina-display 4G iPad, payment geeks were poring over the details of a patent released Tuesday describing features of a mobile wallet to be used in some future version of the iPhone. Patently Apple reported that, while we’ve seen a number of patents published over the past year dealing with NFC communication and transactions, this patent details credit-card transaction rules, including a note that credit card companies will send statements (or at least receipts) directly to a buyer’s iTunes account. “The iWallet project just became a little more real today,” PatentlyApple noted.