Thoughts on what happens when live video is commoditized. 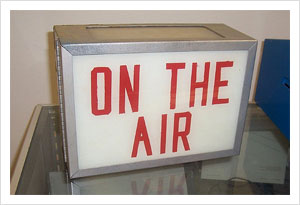 The wide rollout of Google+ Hangouts On Air got me thinking about the implications of low-cost / easy-access live broadcasting.

The commoditization of “live” is the latest in a series of significant web-based media disruptions. First the web came for text, then it overwhelmed photos, it absorbed audio, it claimed video, and now it’s got designs on dismantling the complications of live broadcasting. This is a big deal.

1. The democratization of a communications channel produces creativity, nonsense, and awareness

By making it easy for anyone to upload and disseminate video, YouTube — along with low-cost cameras and cheap storage — destroyed video’s quality barrier. Video is no longer a special occasion sort of thing. You don’t keep a bulky video camera in storage anymore. You don’t limit its use to vacations and family gatherings and graduations. Now, you can film everything, anywhere and upload it immediately. Granted, this produces massive amounts of noise. But it also lets video capture the ambient and serendipitous moments of life — the ways people really look and really act (for good and bad); the feeling of an environment; the energy of a place. These are the things you would never record if the barriers to entry were large and costly.

There’s an honesty in this material. I can’t tell you what its direct value may be, but I have a feeling the overall awareness it creates will positively shape our views of the world and each other. (Or it’ll lead to global self-loathing and a ban on high-resolution cameras …)

Let’s extend this thinking to live broadcasts. When live is no longer a big deal — when you can set up a camera and open up a direct channel to the world — we can begin showing a reflection of our in-the-moment selves and businesses and projects. I’m fascinated by this. There’s something elegant and intriguing about watching people do what they do, particularly when they’re not doing it for show. Again, I just have this sense that a view into a person’s “realness” will yield deeper benefits down the line.

It’s like leaving Skype open all day so you can pop in and out of conversation with colleagues or friends. Or conducting a video conference with technology that doesn’t go offline every 30 seconds. At a certain point, the “I’m living in the future!” nature of what you’re doing gives way to habit. That’s not a camera or a screen. That’s a person. And in time, as we get used to it, the technology that facilitates these interactions will melt away. We’ll assume these live video connections are possible just as we assume we can look up anything on the Internet.

Many of us have already experienced the value of this assumption. How often do you use Google Chat or Skype or some other video tool to catch up with loved ones? When I travel, I know that at some point I’ll be seeing and talking aimlessly with my kids — real chatting about unimportant things, just like we do when I’m sitting at home with them. That’s a live broadcast that makes my life richer. I’m curious and hopeful about what happens when that kind of experience is extended beyond one-to-one interactions, as the new Hangouts On Air feature allows. What will it yield?

Full disclosure: I’m evangelizing all this live broadcast stuff, but I’m a bit of a public video hypocrite. I tend to shy from Skype calls with colleagues because audio is just fine thankyouverymuch. And I do check my hair and clothing when we’re about to go live from one of O’Reilly’s events. But my attitude is changing. I don’t worry quite as much about my live appearance as I once did because I’ve grown comfortable in front of a camera. I know what to expect. I anticipate that others will travel a similar path: from “oh no, don’t put me on air” to “oh, I didn’t notice we were live.”

2. Commoditization of a channel creates an inevitable “flight to quality”

The editor/producer side of me loves this part.

The critics who have pointed to democratized media’s harmful effects on society and culture and youth and what have you have been too busy lamenting to notice the “flight to quality” that’s taking place. Google is investing big money in YouTube’s original content. Netflix is creating its own shows and resurrecting others (there’s still money in the banana stand). Amazon is in on this too — and it’s going the original route across media forms.

The point here is that commoditization of a channel initially swings the pendulum toward broad-based, anyone-can-do-it material. But as the novelty fades, attention goes back toward the quality content. Bottom line: professionals can thrive amidst these democratized channels because good material will always have a gravitational pull. 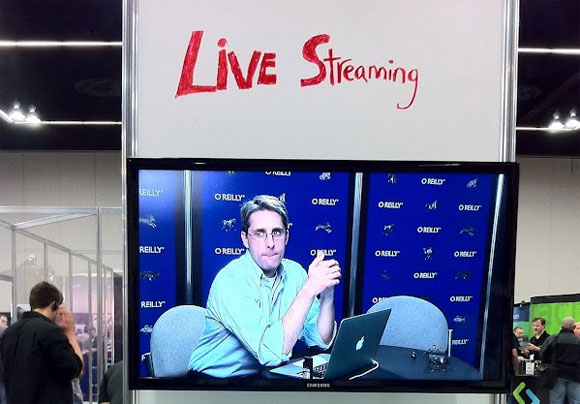 Alasdair Allan snapped this shot during O’Reilly’s live broadcast from OSCON 2011 (we’ve since improved our set-up and the interviewer doesn’t stare into space quite so much now).

In fact, quality is a competitive advantage. If you care more and offer more and make your product look and feel better than everyone else’s, you carve out your own niche. That’s something we’ve focused on with O’Reilly’s live event coverage. It started as a little side project with a single camera and a guy asking questions, but it’s evolved into a multi-camera, multi-channel, high-resolution program. We’ve improved as the technology has improved because we want to get better. That’s just a natural instinct.

This is a transition others will experience as well. You can’t help but get better the more you do something. An active interest in a nascent hobby often turns into “pro-sumer” skills — or perhaps even full-fledged professional skills. We’ve seen this happen with online publishing, digital photography, podcasts, and recorded video. The coming commoditization of live broadcasting will follow the same path. Soon, we’ll have low-cost live programming with high-quality content. Flight to quality isn’t just about consumption. It drives production as well.