Does the Open Government Partnership merit more oversight and attention?

Rep. Issa weighs on on the Open Government Partnership and international treaties. 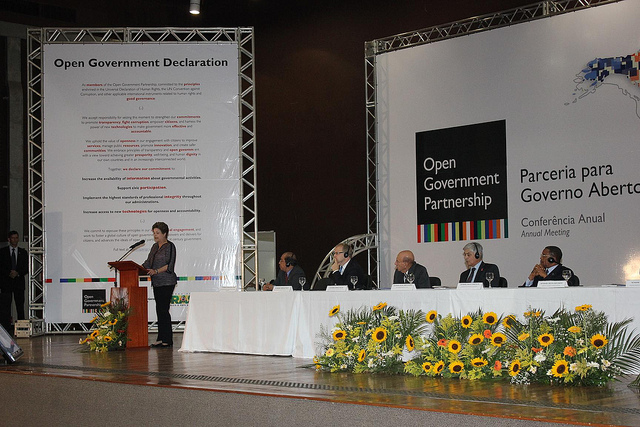 There are any number of responsibilities and challenges inherent in moving forward with the historic Open Government Partnership (OGP) that officially launched last September. Global Integrity’s recent assessment of the National Action plans submitted to the Open Government Partnership by participating countries found cause for both concern and optimism, As I’ve highlighted elsewhere previously.

The National Action Plan commits the United States to 18 different open government initiatives, including implementing the Extractive Industries Transparency Initiative (EITI). One of the primary functions of the committee that Representative Darrell Issa (R-CA) chairs in the U.S. House is to provide oversight of what’s happening in the Executive Branch of government. In that context, the Government Oversight and Reform has an important role in overseeing not just what the proposals are but how they’re actually executed by agencies. In March 2011, the committee held a hearing on open government initiatives in the United States.

Earlier this summer, I interviewed Rep. Issa about a number of issues related to open government at the federal level including the involvement of the United States in OGP. Here’s what he had to say on the topic:

There always will be people who only see the negative of the United Nations or before that, the League of Nations. There will be people who find the World Trade Organization a group that needs to be struck down, because they view the access by the developed nations to assets of the developing nations works to their detriment.

Using those as backdrops, any time lawful representatives of governments come together to see if, in fact, there’s a win-win, I applaud it. The question that I have with this formation is will they come back to their people and stand the test of the traditional question of what is sovereign and what isn’t? And more importantly, see if they have the will of their people broadly through actual new statutes. A lot of what we’re seeing in agreement abroad right now is that individuals from our government go over. They agree to agree, but they never come back and make the circle, of do the American people agree. Do their representatives have the information, and an intervening election, so that when they vote for it, they’re voting for something akin to a treaty?

I think you see it in TPP [The Trans Pacific Partnership], and other things, that sometimes what you do is you say, “Well, we’re bound internationally for that which has not been bought into by the country itself, the people of the country.” I’m broadly for these kinds of talks. I’m decisively against finding out that you’re bound to something that wasn’t approved, not just by legislative representatives but by the American people, because I can give somebody authority to go have a conversation. I can’t give them authority to make a deal on behalf of the American people that the American people don’t know until after the deal has been made.

With respect to the concerns Rep. Issa raised about whether the American people have been consulted, each one of these national action plans for the Open Government Partnership was arrived at with a public consultation with the people of the countries in question. (I was present at the third White House open government partnership consultation as a member of civil society and posted my notes online.) There has been criticism about whether those public consultations are good enough or not, including the one held by our neighbor to the north, up in Canada. (Full disclosure: I was asked to sit on Canada’s open government advisory board and made a series of recommendations for Canada.) Once agreed to, it will be up to civil society and Congress to hold the government of a country accountable for implementing the plans.

There will be inevitable diplomatic challenges for OGP, from South Africa’s proposed secrecy law to Russia’s membership. Given that context, all of the stakeholders in the Open Government Partnership — from the government co-chairs in Brazil and the United Kingdom to the leaders of participating countries to the members of civil society that have been given a seat at the table — will need to keep pressure on other stakeholders if significant progress is going to be made on all of these fronts. If the next President of the United States doesn’t directly support the partnership and its principles on the campaign trail and in actions, it will leave considerable room for other countries to score diplomatic points for joining without delivering upon the promise of its requirements for their people. If OGP is to be judged more than a PR opportunity for politicians and diplomats to make bold framing statements, government and civil society leaders will need to do more to hold countries accountable to the commitments required for participation: they must submit Action Plans after a bonafide public consultation. Moreover, they’ll need to define the metrics by which progress should be judged and be clear with citizens about the timelines for change.

How will “open government” play into Election 2012?

It remains to be seen if open government or OGP comes up as a significant issue in the presidential campaign or in the context of this year’s Congressional election. While the Obama and Romney campaigns are heavily criticizing one another on the issue of “transparency,” from the White House’s mixed record to the former Massachusetts governor’s records in office or work in the Winter Olympics, the future of U.S. involvement in the partnership or its commitments in the plan isn’t making the campaign stump. For that matter, neither is open innovation in the public sector, including the use of prizes and challenges, or lean government.

That’s unfortunate. While there may be a strong rationale for both candidates for the presidency to focus on other issues than the emerging, often nebulous field of “open government,” including fundamental concerns like the economy, foreign policy, energy, education or healthcare, more open policies stand to benefit each of those areas. For instance, at the launch of OGP last September in New York, World Wide Web inventor Tim Berners-Lee argued that more transparency in aid and financial markets attracts more investment in developing countries. The party that would stand to benefit the most from competition on open government would be the American people.

And, while the ambiguity of open government and open data has been driving discussions online for months now, there’s just enough traction behind initiatives around open health data, energy data, and smart disclosure for policy makers, legislators and the electorate to pay a bit more attention to what’s happening in those areas.