Choking the Olympic spirit for profit.

I love the olympics. I love sport. And the olympics, still, despite it all, seem to me an incredible distillation of sport’s dedication, intensity, joy, humanity, and drama. Whether it’s the higher order game theory playing out in the biking peloton, the slowly evolving drama of the marathon, the sheer primal athleticism of weighlifting, or the H2O-immersed VO2max test that is the 400m individual medley, I just can’t get enough of it.

But NBC insists on forcibly reminding me at every turn that the Games are also something else. Like college football players, the athletes are mere “content” in a much bigger game. In this case what amounts to a two week utopian experiment in Nationalist Corporatism. A frenzy of metal counts, extractive economics and mind numbing cultural absurdity – where countries are reduced during their introduction to an association with their biggest historical monster.

But you had to wait to hear it because Costa’s idiotic commentary was held on tape until NBC’s $1B worth of sponsors were ready for you to see it: PrimeMonetizationTime. So, a giant fence surrounds the proceedings, put there by the IOC, NBC, and Akamai, where even tweets are controlled and the biggest event on the planet is dribbled out in a maddening temporal shift. But even then we had to endure systematic editing to make sure no one in the Kingdom of TeaMerica might be offended by anything, or bored. It doesn’t have to be this way. This was such a lost opportunity to make it great.

I still haven’t seen the opening ceremony from Beijing (same reasons, same perp), and I missed the one last night too. Well, I didn’t miss it exactly. When my tweet stream started lighting up late yesterday afternoon with visions of giant babies and Voldemort and flying bicycles and all the other British trippiness I ran to my TV. Work can wait, I want to see this! But I was blocked at every turn. Like an Iranian dissident I finally managed via a secret proxy to get a glimpse. But it lasted only a moment before some well-compensated gatekeeper sussed it out and blocked my subversive stream. I couldn’t deal with the asymmetry of the commentary without the thing, so I just shut down Twitter.

Did you know that the in order to use the official iPhone and iPad apps from NBC to live stream events you have to subscribe to a particular set of cable companies, and furthermore you have to be subscribed to a short list of pay channels? The web is no more an open network. It has been reduced (and diminished) to mere media pipe that connects (only) to your monopoly owned app – It’s like the AT&T of old. And if that pipe doesn’t go to your TV, it also won’t go to your computer, tablet, or phone. That’s a fascinating take on net neutrality isn’t it? We’ll happily use other people’s networks to deliver content to our “roaming” subscribers, but we demand to be able to charge when those dastardly web companies deliver their stuff on our pipes. 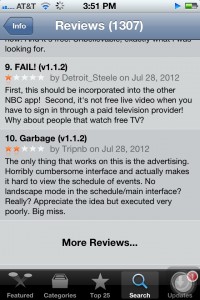 Anyway, here’s the thing. I would happily pay $50 to access those streams for two weeks, assuming they were done well. But I’m not going to switch to Comcast from my current provider to get it. And it’s absolutely idiotic for Comcast/NBC to think I would. The Olympics last for two weeks, but that behemoth’s crap service is forever.

These guys run their media empire the way Chavez runs Venezuelan power companies. Provide crappy service and limit innovation but keep the cash coming to what is essentially an IoC chartered royal monopoly. They could make it great for everyone, an amazingly wonderful experience, but then they would have to worry about what creative destruction might do to their current benefactors.

But what if they thought about it differently? What might an open minded approach to the Olympic experience look like? If a well worn butt print in front of Comcast’s primetime-plasma-portal wasn’t a pre-req to the enjoyment of sport?

Instead of subverting the web, use it! Make the “Olympic Movement” a movement by creating a web of content and connections – stop trying to confine new media into the old one-to-many transmission model. Make every event available in real time to anyone with a web browser while making advertising possible (and viable) for a much wider range of companies. Sell apps that add context, content, and commentary around the events. Make it easy for fans that are in attendance to add their own content about the experience whether through specific apps written for the games or existing networks like Twitter. Design for a great multi-screen experience that makes the butt print model worth it. Partner with streaming services like Netflix to multiplex NBC’s single channel into as many as it takes to bring any event you might want to see to your television if that’s where you want to view it. Hell, I don’t know, I’ve only been thinking about this for five minutes and I already know I could create a hundred times better experience than these guys have.

Why am I so angry about this? I guess it’s because of a collision of value systems. The values implied by elite sport – intensity, commitment, integrity – are things worth emulating and when they are cast in contrast with the extractive, closed, corporatist, reactive values of the IoC and NBC the collision is just too much, at least for me. Such a massive fail.