Social networks are not communities, and other discussions from the Community Leadership Summit

A report from last weekend's unconference

The Community Leadership Summit this past weekend roused thoughts in me about the predictions and analyses I’ve heard over the past few years about social networking and to contrast them with what we were saying about community. I realized that I appreciate social networks but feel much more passionate about communities, and spontaneously called for a session to talk about the differences. This article describes our discussion and summarizes the insights I got this year from the summit.

Attendees at CLS put a lot of effort into taking detailed notes,which you can check out at the CLS Wiki. So I won’t go into great detail here about particular sessions I attended. 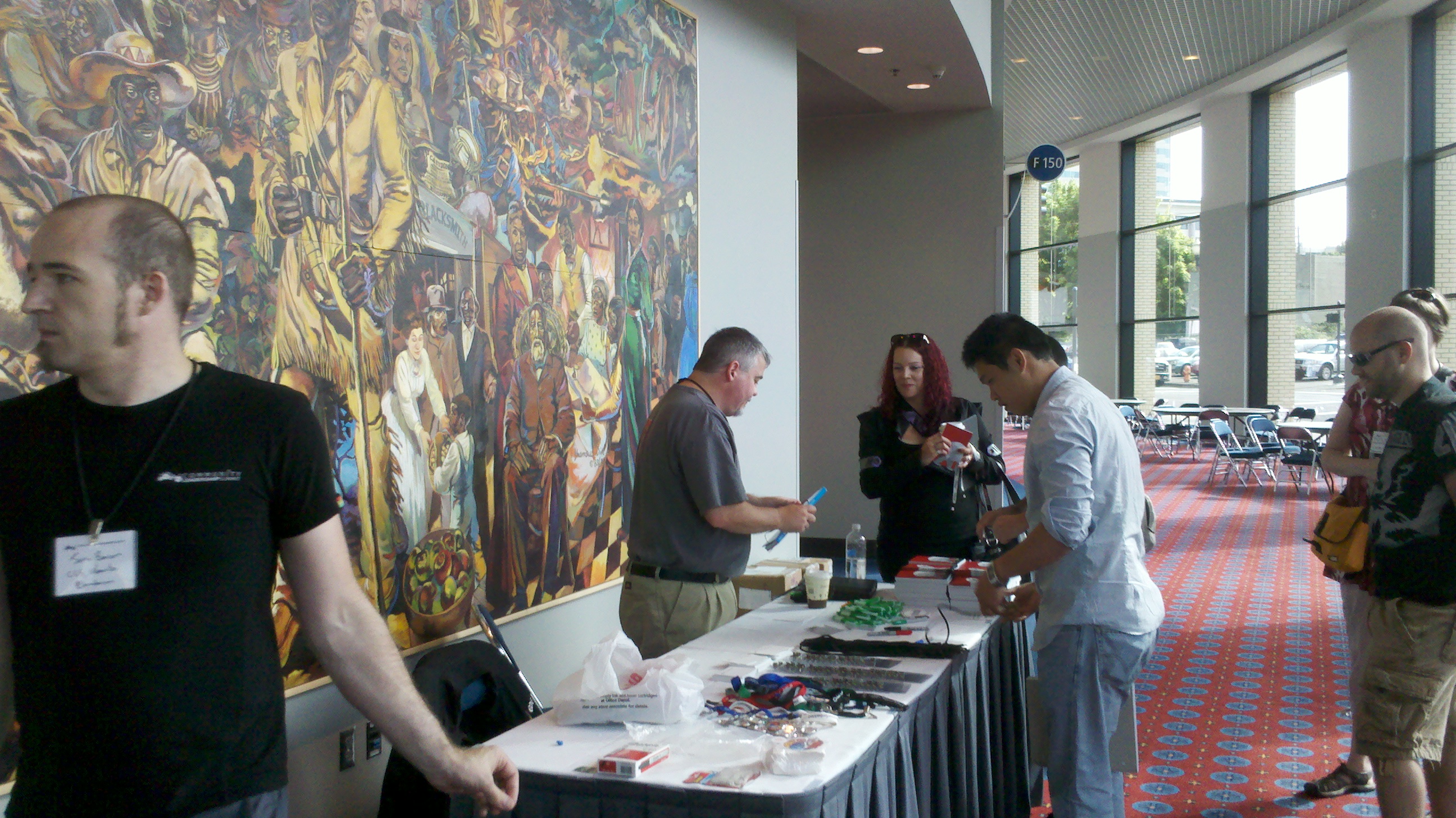 Let’s loosely define a social network as a set of relationships between people who know each other through family, work, school, religious and political affiliations, and other things. The whole human race is one social network, and Facebook is on its way to making that explicit. But in any case social networks are much bigger communities. Even the Ubuntu community (taking that as an example because the creator of CLS, Jono Bacon, is lead community manager at Ubuntu), appears tiny next to any successful social networking provider.

I’ll call a community a group of people who share some facet of life and feel a connection because of that shared trait. Owners of Chevrolets are not a community, although they share that trait, but I talked to an owner of a Saturn once definitely felt part of a community, one fostered assiduously by the Saturn Corporation.

Social networks are complex, as you can tell by drawing a graph among a dozen people. A dizzying number of strong and loose ties unite to give people the urge to peek into each other’s lives. The operational word here is peek, because social networks rarely go deeper.

Communities are complex for different reasons. You may drive someone to the hospital, see her at Bible study, invite her kid over to play with yours, and so forth. Or you may be only peripherally aware of that person because of her ties to others you know. In addition to explicit ties, communities create gravitational forces, which social networks do not.

This is what impels people to invest huge amounts of time, money, and effort. I’m sure I’ll hear from people who jumped in to donate their time and energy for something they found on a social network, but this is not a routine occurrence, and I’d guess what they were doing was hooking into an existing community.
Commitment
People sense that they gain something from a community, and feel they owe something back. Members deliberately set aside time to participate in their community. Social networks have addicts, but that’s different. If somebody could be nurtured by a strong, positive community, he probably wouldn’t need to go on the social network so much to fill some empty search for connection.

Note that people say, “I left that community because I couldn’t stand bad behavior there” (or for some other reason) but they never say, “I left that social network…” I’m not talking about disabling an account on a social networking site, which is a statement about how one chooses to interact with people. I’m saying that you don’t feel a need that untangle your social ties (and probably couldn’t do it anyway) because you never felt commitment in the first place. However, you may unfriend several people on a social network as part of a decision to leave a community.

Identity
This may be the most powerful weapon community has. When you join, it becomes part of how you see yourself. What happens in the community affects you not only materially (such as a decision to create or not create a software feature you need) but psychologically. People in a community such as Ubuntu or Ruby on Rails–not to mention geographic communities–really take seriously how the view the community and how it presents itself to others, because that in turn is an aspect of personal identity.

Some social networks seem to be more conducive to community-forming than others. Attendees felt that they had better community experiences on LiveJournal than on Facebook (perhaps because LiveJournal fostered more privacy) and a better community experiences on Facebook than on LinkedIn. None of these have the power of old-fashioned email forums, where the same people view the same messages month after month. On a social network, you’ll see one-tenth of what the person one degree away from you sees.

Social networks are great for spreading information to people with whom you have relationships, and gathering information if you are sincerely listening to your followers, but social networks won’t foster passion, commitment, or identity on a large scale. For that, you need to form relationships and gradually form the gravitational attraction between them that characterizes community.

In the rest of this article I’ll highlight some themes from CLS.

Format of the unconference

Jono started CLS four years ago, after writing The Art of Community for O’Reilly, positioning it an extra weekend before our O’Reilly Open Source Convention. This was a cogent move because free software and open source advocates spontaneously form communities, and these communities become the locus for everything that happens on open source projects.

However, it means that conversation always returns to the needs of open source software projects, no matter what you start from. I’ve been in sessions that are organized to discuss something generic such as “how do you mentor new community managers” and end up discussing the best hosting software for a web-facing application. So I’m glad CLS is branching out and that people who have organized the OSCon one are creating other summits in other places. I gave a short talk about the lessons the CLS attendees could learn from community organizing (the classic Saul Alinsky style of organization, such as Barack Obama worked for he went to law school. The veterans of community organizing would feel more welcome at a CLS that wasn’t dominated by software developers, but a healthy mix of both communities would teach each other a lot.

The unconference format is ideal for a meeting like this one, because when it comes to community, everybody is an expert at the community he or she is part of and everybody has a perspective worth hearing. the unconference format involves audience members putting suggestions for sessions on a large board at the beginning of each day. With nearly two hundred attendees between the two days of CLS (it’s growing year by year), we had no trouble filling ten slots of sessions with suggestions made by the participants.

Advice at CLS has gotten tighter and more detailed over the years as the field of community management itself has firmed up and matured. Several people lamented how people kind of fall into the role of community manager without knowing there are rules and best practices now. (One lightning talk also decried the use of fanciful names for community management job titles, such as “evangelist” or even “ninja.”) Sessions were held on training and mentoring.

Several speakers noted that measurement is a big theme at this year’s CLS. It was also the subject of a new chapter Jono added to The Art of Community. Speakers showed graphs and statistics to back up assertions. For instance, tracking contributions to the Gentoo Linux project showed that people who make destructive comments and bully community members led to permanent drops in contributions. Getting rid of the bullies topped the decline but did not cause contributions to rise back to their original high.

The usual discussions about hosting options and licenses for open source software took place, but I thought participants this year were more comfortable with the options. People seem comfortable with the predominance of GitHub for hosting and with the major licenses. At one session I attended, Contributor License Agreements were heavily criticized as barriers to entry. There are better ways to protect yourself against the risks that you think a CLA will protect you from.

Simon Phipps led a session about the Open Source Initiative, where he serves as president and which vets licenses among other activities. The board wants to expand its scope greatly and will announce some major outreach activities later this week.

Gamification was another recurring theme, with presentations by Jono (who created a modest trophy system for Ubuntu community members who do things such as submit their first bug report) and others. We were very conscious of the tension between intrinsic and extrinsic motivation, and the risk of introducing competition into a collaborative environment. On the other hand, one shouldn’t judge the whole field of gamification from experience with one or two poor implementations. Open source communities might benefit if they can find ways to use game strategies to help members appreciate their own accomplishments without feeling bad about those of other members.

Basically, as I said during a gamification talk, it can be useful if it strengthens relationships and allows people to feel good about seeing the people they respect get ahead. Relationships, as I said earlier in this article, are fundamental to communities.

Open data is at least as hot a topic now as open source, and I attended a session about topics such as whether community members can appreciate the value of opening their data, privacy risks, and the difficulty of using data published by third parties when the European Union offers intellectual property protection to “collections of information.”

I led my usual session on documentation and got some good comments about both tools and motivational strategies. People are often excited by the chance to talk to technical leaders in their community and get their writing reviewed by these leaders.

An interesting lightning talk covered some metaphors from other disciplines that can illuminate community management. For instance, one design pattern from architecture points to an “intimacy gradient” in good buildings, taking people gradually from public spaces to more private ones. Communities must also develop tools and practices for providing the right amount of public exposure to each activity, such as submitting a bug. In city planning, Jane Jacobs highlighted the importance of mixing primary uses for spaces, such as living, shopping, and recreation. Similarly, communities need a mix of volunteers and corporate participants, a mix of casual followers and hard-core maintainers, and so on. Software can become more modular to permit diversity of use.

In conclusion, CLS is becoming an indispensable adjunct to OSCon and is spreading to other areas. It’s a great way for OSCon attendees to strengthen their own sense of community and enjoy a little preview of the main conference in a more relaxed setting. 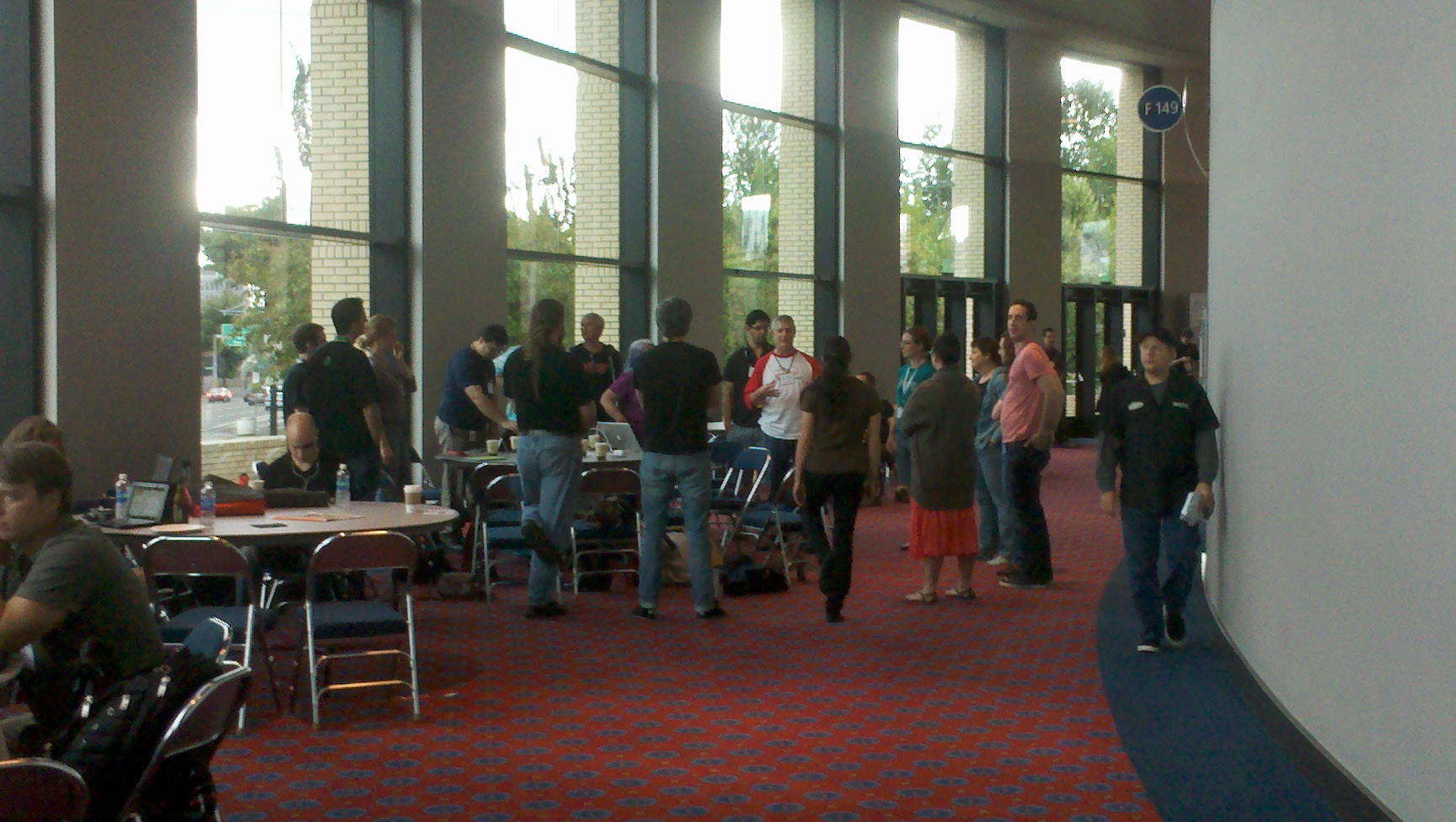 Breathe! A popular session about keeping calm at a conference