Holiday online and mobile spending, paying with your fingerprint, and creepy mannequins are watching you shop.

The big news this week is the cyber spending that happened over the holiday weekend. Starting with Thanksgiving Day, online shoppers found time between football downs, turkey, stuffing, and pie to spend $633 million at online retailers, according to Internet analytics company comScore — a 32% increase over 2011. Black Friday, too, saw a sizeable increase in cyber shopping with $1.042 billion in online sales — 26% over 2011 and the heaviest online spending day for 2012, at that point. Cyber Monday stole the show, though, with consumer online spending ringing in at $1.46 billion, making it the biggest online spending day in U.S. history, according to comScore. 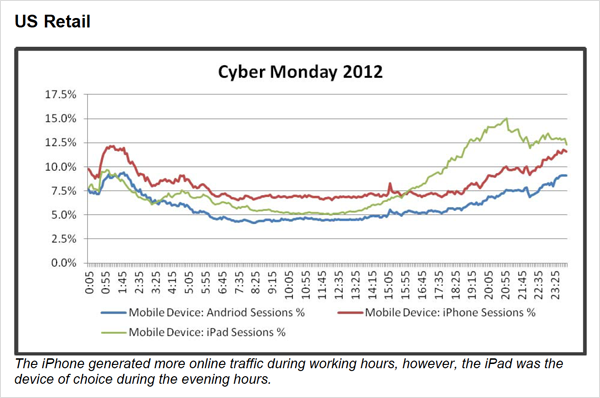 More holiday spending than ever occurred via mobile devices as well. Sarah Perez reports at TechCrunch that a report from mobile commerce startup Branding Brand showed a 221% increase year-over-year in smartphone spending (not including sales via tablets) on Thanksgiving and a year-over-year increase of 128% on Black Friday. According to IBM’s Holiday Benchmark data, mobile purchases as a whole exceeded 16% on Black Friday, up from 9.8% in 2011. And according to IBM’s Cyber Monday Report (PDF), more than 18% of consumers visited retail sites via mobile devices on Cyber Monday, a more than 70% increase over 2011, and mobile sales approached 13% — a year-over-year increase of more than 96%. Of these mobile shoppers, 58.1% used smartphones, compared to 41.9% who shopped via tablet, according to the report.

Luke Wroblewski has additional holiday mobile shopping highlights from Thanksgiving Day and Black Friday in his Data Monday blog. A few tidbits include:

Put away that wallet — pay with your fingertip

Forget pulling out your wallet for a credit card or your mobile wallet to pay with an app — Discover wants to simplify the entire payment process and enable you to pay with your fingerprint. Becky Yerak reports at the Chicago Tribune that the credit card company plans to begin a pilot program to allow 300 to 350 of its employees to pay for lunch in the headquarters’ cafeteria via fingerprint payment. The system isn’t completely equipment-free for the consumer, however. Yerak reports:

“Each [participating] employee will also receive a key fob with a chip that includes information about their individual credit-card account as well as their fingerprint. To complete a purchase, the user will place his or her finger on a fingerprint reader near checkout, with the key fob kept nearby, such as in a pocket or purse, for the transaction to go through.”

James F. Thompson notes at PRNewser that the public may be wary of connecting such a personal part of themselves to payments, but he says the public eventually will come around if Discover drives home the superior level of purchasing security the new technology will provide — after all, the actual human purchaser, not just a credit card, must be present to complete the transaction. This could spiral into a whole new dimension of crime beyond purse snatching and pickpocketing, but the potential is there to revolutionize payments beyond anything mobile wallets have been able to achieve thus far.

The store mannequins really are looking at you

One could argue that mannequins are inherently creepy, but Italian manufacturer Almax has taken the creepy factor to a whole new level. Liat Clark reports at Wired UK that the company is fitting mannequins with facial recognition software, allowing merchants to track their customers’ ages, sex and race. CEO Max Catanese explained to Clark how the EyeSee mannequin works:

“It’s a system that’s able to give demographics about the person passing in front of it. It’s based on an algorithm. The algorithm analysed three million faces before going to production and now the number, as well as the accuracy, is rising. Once [companies] read the data, they can implement strategies inside the stores to boost sales.”

According to Clark’s report, the mannequins already are in place in the stores of five global brands in Europe, the U.S. and Canada. Though merchants are finding the additional shopper data useful in arranging and staffing their stores, the technology raises the obvious question of privacy. Data protection and privacy law specialist Stewart Room told Clark “[t]he capturing and processing of images of people is right in the middle of the Data Protection Act” and that, at least in Europe, this type of marketing profiling will need to be consent-based.

Catanese argues that there are no real privacy concerns, noting that the stores have security cameras recording customers anyway and explaining that the mannequins don’t record or store images. Still, it will be interesting to see how this sort of data gathering and profiling will play out with consumers and lawmakers. After all, as Clark points out, the Irish Data Protection Commission forced Facebook to remove its facial recognition tagging system in European markets after an Austrian law student complained.