The Industrial Internet of Things

The opportunity no one's talking about.

Photo: Kipp Bradford. This industrial burner from Weishaupt churns through 40 million BTUs per hour of fuel.

A few days ago, a company called Echelon caused a stir when it released a new product called IzoT. You may never have heard of Echelon; for most of us, they are merely a part of the invisible glue that connects modern life. But more than 100 million products — from street lights to gas pumps to HVAC systems — use Echelon technology for connectivity. So, for many electrical engineers, Echelon’s products are a big deal. Thus, when Echelon began touting IzoT as the future of the Industrial Internet of Things (IIoT), it was bound to get some attention.

Admittedly, the Internet of Things (IoT) is all the buzz right now. Echelon, like everyone else, is trying to capture some of that mindshare for their products. In this case, the product is a proprietary system of chips, protocols, and interfaces for enabling the IoT on industrial devices. But what struck me and my colleagues was how really outdated this approach seems, and how far it misses the point of the emerging IoT.

Although there are many different ways to describe the IoT, it is essentially a network of devices where all the devices:

In the industrial context, rolling out a better networking chip is just a minor improvement on an unchanged 1980s practice that requires complex installations, including running miles of wire inside walls. This IzoT would have been a breakthrough product back when I got my first Sony Walkman.

This isn’t a problem confined to Echelon. It’s a problem shared by many industries. I just spent several days wandering the floor of the International Air Conditioning, Heating, and Refrigeration (AHR) trade show, a show about as far from CES as you can get: truck-sized boilers and cooling towers that look unchanged from their 19th-century origins dotted the floor. For most of the developed world, HVAC is where the lion’s share of our energy goes. (That alone is reason enough to care about it.) It’s also a treasure trove of data (think Nest), and a great place for all the obvious, sensible IoT applications like monitoring, control, and network intelligence. But after looking around at IoT products at AHR, it was clear that they came from Bizzaro World.[1] 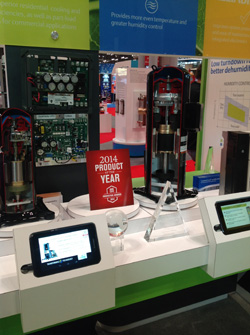 Photo: Kipp Bradford. Copeland alone has sold more than 100 million compressors. That’s a lot of “things” to get on the Internet.

I spoke with an engineer showing off one of the HVAC industry-leading low-power wireless networking technologies for data centers. He told me his company’s new wireless sensor network system runs at 2.6 GHz, not 2.4 GHz (though the data sheet doesn’t confirm or deny that). Looking at the products that won industry innovation awards, I was especially depressed. Take, for example, this variable-speed compressor technology. When you put variable-speed motors into an air-conditioning compressor, you get a 25–35% efficiency boost. That’s a lot of energy saved! And it looks just like variable-speed technology that has been around for decades — just not in the HVAC world.

Now here’s where things get interesting: variable-speed control demands a smart processor controlling the compressor motor, plus the intelligent sensors to tell the motor when to vary its speed. With all that intelligence, I should be able to connect it to my network. So, when will my air conditioner talk to my Nest so I can optimize my energy consumption? Never. Or at least not until industry standards and government regulations overlap just right and force them to talk to each other, just as recent regulatory conditions forced 40-year-old variable-motor control technology into 100-year-old compressor technology.

Of course, like any inquisitive engineer, I had to ask the manufacturer of my high-efficiency boiler if it was possible to hook that up to my Nest to analyze performance. After he said, “Sure, try hooking up the thermostat wire,” and made fun of me for a few minutes, the engineer said, “Yeah, if you can build your own modbus-to-wifi bridge, you can access our modbus interface and get your boiler online. But do you really want some Russian hacker controlling your house heat?” It would be so easy for my Nest thermostat to have a useful conversation with my boiler beyond “on/off,” but it doesn’t.

Don’t get me wrong. I really am sympathetic to engineering within the constraints of industrial (versus consumer) environments, having spent a period of my life designing toys and another period making medical and industrial products. I’ve had to use my engineering skills to make things as dissimilar as Elmo and dental implants. But constraints are no excuse for trying to patch up, or hide behind, outdated technology.

The electrical engineers designing IoT devices for consumers have created exciting and transformative technologies like z-wave, Zigbee, BLE, wifi, and more, giving consumer devices robust and nearly transparent connectivity with increasingly easy installation. Engineers in the industrial world seem to be stuck making small technological tweaks that might enhance safety, reliability, robustness, and NSA-proof security of device networks. This represents an unfortunate increase in the bifurcation of the Internet of Things. It also represents a huge opportunity for those who refuse to submit to the notion that the IoT is either consumer or industrial, but never both.

For HVAC, innovation in 2014 means solving problems from 1983 with 1984 technology because the government told them so. The general attitude can be summed up as: “We have all the market share and high barriers to entry, so we don’t care about your problems.” Left alone, this industry (like so many others) will keep building walls that prevent us from having real control over our devices and our data. That directly contradicts a key goal of the IoT: connecting our smart devices together.

And that’s where the opportunity lies. There is significant value in HVAC and similar industries for any company that can break down the cultural and technical barriers between the Internet of Things and the Industrial Internet of Things. Companies that recognize the new business models created by well-designed, smart, interconnected devices will be handsomely rewarded. When my Nest can talk to my boiler, air conditioner, and Hue lights, all while analyzing performance versus weather data, third parties could sell comfort contracts, efficiency contracts, or grid stabilization contracts.

As a matter of fact, we are already seeing a $16 billion market for grid stabilization services opened up by smart, connected heating devices. It’s easy to envision a future where the electric company pays me during peak load times because my variable-speed air conditioner slows down, my Hue lights dim imperceptibly, and my clothes dryer pauses, all reducing my grid load — or my heater charges up a bank of thermal storage bricks in advance of a cold front before I return home from work. Perhaps I can finally quantify the energy savings of the efficiency improvements that I make.

My Sony Walkman already went the way of the dodo, but there’s still a chance to blow open closed industries like HVAC and bridge the IoT and the IIoT before my Beats go out of style.

[1] I’m not sorry for the Super Friends reference.