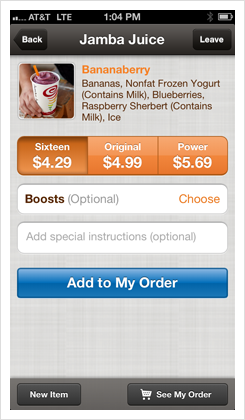 PayPal announced this week it has expanded its U.S. footprint to include 23 new partners for its PayPal in-store payments service, in addition to the 15 national partners announced last May, making its service available in 18,000 physical store locations across the country.

According to a post on the PayPal blog, new retail partners include Barnes & Noble, Office Depot, Foot Locker and Jamba Juice, and “two additional partners that [they] will share publicly soon.”

The deal PayPal struck with Jamba Juice goes beyond the in-store payments service that allows customers to pay with their phone number and a pin, or by using their PayPal payment card. Chloe Albanesius reports at PCMag that PayPal is testing its PayPal App in one Jamba Juice location to allow customers to place and pay for their orders, so when they arrive at the location, they just have to pick up their smoothie.

Global product VP Hill Ferguson notes in a post at the PayPal blog, that the feature is available only for iPhone users at this point and that there are plans to expand to more Jamba Juice locations this year.

In addition to its announcement of new retail partners, PayPal also announced a new hardware partner. Sarah Perez reports at TechCrunch that PayPal is “also partnering with point-of-sale and hardware maker NCR to expand into restaurants, as well as into other businesses, including gas stations and convenience stores.”

PayPal retail services VP Don Kingsborough explains on the PayPal blog that in the first phase of the agreement, PayPal mobile payments options will be integrated into the NCR Mobile Pay app and NCR Aloha Online Ordering. “PayPal will be a payment option and allow consumers greater choice for simple, fast and secure purchases, alongside credit or debit cards.,” Kingsborough writes. “Consumers will also be able to use the PayPal mobile application to locate, order-ahead and “check-in” at participating NCR Mobile Pay merchants to access the same functionality.”

According to Kingsborough’s post, the agreement also will involve integrating PayPal mobile payments into NCR’s Convenience-Go (C-Go) app for gas stations and convenience stores and an enhancement to NCR’s Netkey Endless Aisle app “to enable in-store payments with PayPal to either buy-in-store or provide shipping capability for out of stock items.”

Mobile Commerce managing editor Bill Siwicki argued this week in a post at Internet Retailer that mobile wallets are not going to catch on anytime soon “due to a variety of hurdles, credit cards being perhaps the biggest.” Quoting an email exchange with Ben Saren, vice president of marketing at payment processor Litle & Co., Siwicki writes:

“‘People are never going to switch to mobile wallets as long as it’s just as easy to pull out a credit card as it is to pull out your phone. There’s no incentive to change the channel,’ Saren says. … ‘Love or hate the card networks, they have paved all of the highways and largely made them traffic-free. When you go to a retail location and buy something with a piece of plastic, the authorization happens in less than a second. … So somebody needs to tell me how the system is broken today and why we need something else.'”

Siwicki does note, however, that though “mobile wallets today are not a better mousetrap,” they do connect with the Internet in ways that credit cards can’t, which opens new avenues for merchants to offer coupons and loyalty programs. “Somewhere down the line, way down the line,” Siwicki writes, “I think making payments via smartphones will catch on, simply because of the central role smartphones are coming to have in people’s lives.”

In that same vein, SAS Institute’s Lori Schafer argued this week at the NRF 102nd Annual Convention & Expo that Apple is in a better position to disrupt mobile payments than current competitors. Quoting Schafer from her session, The Tech Titans’ War for Mobile Dominance – How Amazon, Apple, eBay, Facebook and Google are Shaping Our Mobile World, Lauren Johnson reports at Mobile Commerce Daily:

“‘When Apple adds in NFC, it will have two advantages over everyone else,’ [Johnson] said. ‘First, the iTunes database is huge, with over 400 million people already signed up. Second, the iPod touch and iPads are fast gaining traction as the next generation of cash registers, and a number of retailers are now starting to roll them out to their associates in-store instead of using the traditional cash register. This sets up Apple to potentially own both sides of millions of transactions.'”

Amy Martinez observed at The Seattle Times this week that retailers are “lukewarm” about integrating mobile commerce into their sales strategies. Citing a new report from Forrester Research, Martinez notes that smartphones only generated $5 billion of the $226 billion e-commerce market in 2012, and because of that, “[r]etailers will continue to invest in mobile strategies, but the bulk of their technology spending in 2013 will be on the basics, such as improving online checkout, product descriptions and the overall user experience, according to the report.”

In a presentation at the National Retail Federation’s annual convention this week in Manhattan, Martinez reports, Forrester analyst Sucharita Mulpuru said that “[r]etailers have been burned getting very, very hyped up over mobile … Even though consumers have these phones, the number of transactions on those phones is still small.”

Responding to Martinez’s piece, Colin Gibbs at GigaOm Pro writes that he doesn’t doubt Forrester’s data, but argues that mobile commerce is more than transactions. Gibbs says the very fact that smartphones are an inferior platform for browsing, price checking and entering or linking to credit card information is the reason retailers need to step up their mobile strategies. He writes:

“That’s why the top priorities for retailers in the mobile world should be building solid mobile websites, establishing relationships with their customers, delivering targeted ads and discounts, and encouraging them to come in to the store or to visit online stores on their PCs.”

Gibbs argues that even though closing mobile transactions remains difficult, “ignoring every mobile commerce strategy is short-sighted and dangerous.”