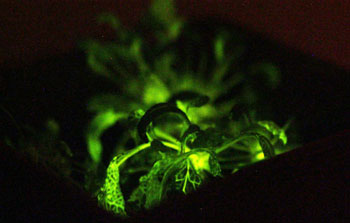 Unlike many of his generational peers, Glowing Plant chief scientific officer Kyle Taylor was never put off by genetically modified organism (GMO) crops. On the contrary: Kansas-born and bred, cutting-edge agriculture was as natural to him as the torrid summers and frigid winters of the southern plains.

“GMO corn first hit the market while I was still in high school,” says Taylor, “and I have to admit I was fascinated by it. It was Roundup resistant, meaning that it you could spray it with the most commonly used herbicide in commercial agriculture and it would remain unaffected. I found that really profound, a breakthrough.”

Agribusiness felt the same way. Roundup (generically, glyphosate) is relatively benign as commercial herbicides go (compared to 2, 4-D and Paraquat, anyway): it binds to soil so migration to waterways is minimal, and it generally degrades quickly. Roundup-resistant corn — and later, resistant soybeans — ushered in the era of no-till agriculture. Farmers no longer had to cultivate between their rows for weed control; they could spray right alongside their standing crops without affecting them. This bolstered profits, and it also had environmental upsides: fewer passes through the fields with heavy farming equipment meant a big drop in fossil fuel consumption and significantly reduced atmospheric carbon emissions. Less cultivation also meant less erosion because the topsoil wasn’t disturbed and exposed to rain and wind.

Taylor’s interest in agriculture was still strong when he graduated from Iowa State University, where he earned his BS in agriculture biochemistry with an agronomy minor.

“But I got a bit disillusioned [with GMO technology] as an undergrad,” Taylor recalls. “Initially, I viewed it as a means for feeding the world, for ending hunger and poverty. But I ultimately came to understand that famine is at least as much a political as a technological problem. I realized that this silver bullet mentality I’d been cultivating wasn’t really grounded in reality.”

Still, he didn’t lose his passion for synthetic biology. The ability to manipulate genetic material struck him as — well, not magic. He was a scientist, after all. But it was wondrous, transcendent. So, he went to Stanford, where he earned his PhD in cellular and molecular biology.

“Maybe GMO crops weren’t going to save the world, but molecular engineering was still one of the most powerful tools ever developed, and I wanted to contribute,” Taylor explains. I worked my butt off, and not because I expected a pay-off. I was just thrilled to be involved.”

After earning his doctorate, Taylor started playing around in DIY bio spaces. It was great fun, but he was looking for something more than amusement. He yearned for a mission, something that could properly accommodate his ambition and talents. Then he met Antony Evans, who had an MBA from INSEAD (motto: The Business School for the World) and worked as a management consultant and project manager at Oliver Wyman and Bain & Company. Evans had an irrepressible entrepreneurial streak. He had founded the world’s first pure microfinance bank (in the Philippines) and developed a mobile app in conjunction with Harvard Medical School.

GMO corn and soybeans have been less-than-effective ambassadors for synthetic plant biology.The two men got along swimmingly, and they realized their skill sets dovetailed. A partnership seemed logical. But what would they do? What could be their product or service? Taylor had been fooling around with bioluminescence in DIY bio labs, simply because he found the phenomenon charming.

“Bioluminescence is such a good teaching tool for biocoding in general,” Taylor says. “When people take a black light and they see a plant glow, it moves them emotionally, especially if they had something to do with it. It opens them up to the possibilities of synthetic biology, its positive aspects, in a way that GMO crops can’t.”

Here, then, was their project: an open source company purveying bioluminescent plants and associated seeds and materials. It wasn’t about ending hunger, but in its small way, it was about saving the world — or at least, it was about helping create a generation of bioengineers who might collectively solve some of the planet’s thorniest problems. GMO corn and soybeans, Taylor observes, have been less-than-effective ambassadors for synthetic plant biology. To attract the young, the hip, and the brilliant, the discipline requires symbols and totems that speak to inclusion and harmony, not corporate dominance. And day-glo houseplants looked like a pretty good place to start: they seem self-contained, controllable, and friendly in a whimsical, Dr. Seuss kind of way. There is no intimation that they could escape from their pots and wreak environmental havoc.

“It started off as an educational platform,” says Taylor of the duo’s initiative, “and at this point, maybe it’s more of a novelty. It’s challenging. There’s this strange tension we’re dealing with, between teaching and inspiring on one hand and making money on the other. There’s certainly no getting around that second part, of course. We needed money to fund what we were doing.”

To get those bucks, the partners went the route now in vogue with so many Silicon-centric start-ups. In April 2013, they launched the world’s first DIY bio crowdfunding campaign on Kickstarter, ultimately raising almost $485,000 from more than 8,400 investors.

Taylor and Evans consider Glowing Plant part of a continuum. Bioluminescence has long functioned as a basic biohacking tool, in that it illuminates, so to speak, cellular mechanisms in a relatively straightforward and easily comprehended way.

The first significant breakthrough in the field occurred in 1986, when researchers inserted a luciferase-producing firefly gene into tobacco plants. The plants glowed — albeit dimly, and only after extended exposure to light. In other words, they could not glow autonomously.

Fast forward 24 years. Researchers at SUNY announced the first “auto-luminescent” plant. Rather than relying on firefly luciferase, SUNY’s team inserted bacterial genes linked to luminescence into tobacco plant chloroplasts. Again, the light from the plant was muted at best, but it at least required no outside source to luminesce. At about the same time, a University of Cambridge team combined firefly luciferase and genes from the light-emitting bacterium Vibrio fischeri to create “Eglowli” bacteria, which emitted enough light to allow a close reading of the London Times.

All this research inspired a syncretic strategy for the partners. What could be achieved by combining the various approaches?

Quite a lot, as it turns out. Glowing Plant expects to ship its first products by the end of this year: potted Arabidopsis (rock cress) plants, ready for display next to your lava lamp, and packets of fertile Arabidopsis seeds. Glowing roses will be available in 2015.

“You can’t use them as a desk lamp, but they definitely glow,” says Taylor of the Arabidopsis products. “And we’re getting more intense illumination with each generation. We’re not at the ‘tree night-light’ stage yet, but we intend to keep turning out bigger and brighter plants. Will they sell in the marketplace? It’s unclear at this point. But they’re beautiful and fascinating plants. I’m cautiously optimistic.”