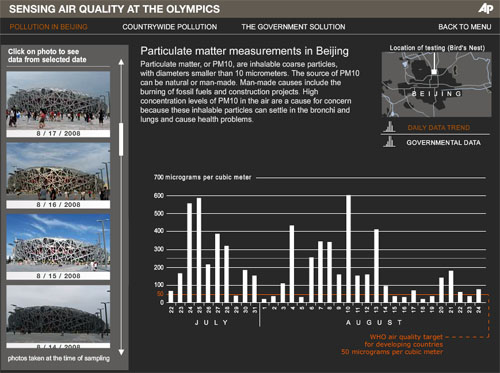 The Beijing Air Tracks project arose from the need to determine what the conditions on the ground really were. AP reporters carried sensors connected to their cellphones to detect particulate and carbon monoxide levels, enabling them to report air quality conditions back in real-time as they moved around the Olympic venues and city. END_OF_DOCUMENT_TOKEN_TO_BE_REPLACED

Why I’m changing my tune on paywalls

A Pew report says paywalls could yield content that justifies a price tag.

The Pew Research Center is out with its annual “State of the News Media” report. Much of it is what you’d expect: newspapers and local television are struggling, mobile is rising, digital revenue hasn’t — and can’t — replace traditional print revenue, and on and on.

“The rise of digital paid content could also have a positive impact on the quality of journalism as news organizations strive to produce unique and high-quality content that the public believes is worth paying for.”

I used to criticize paywalls. I thought they could only work for specialized content or material that’s attached to a desired outcome (i.e. subscribe to the Wall Street Journal, use the insights to make money).

My concern was that publishers would slam walls around their existing content and ask people to pay for an experience that had once been free. That made no sense. Who wants to pay for slideshows and link bait and general news?

But content that’s “worth paying for” is a different thing altogether. Publishers who go this route are acknowledging that a price tag requires justification.

Will it work? Maybe. What I might pay is different than what you might pay. There’s that pesky return-on-investment thing to consider as well.

However, my bigger takeaway — and this is why I’m changing my tune on paywalls — is that value is now part of the paywall equation. That’s a good start.