Strata Week: Infographics for all

Here are some of the data stories that caught my attention this week. 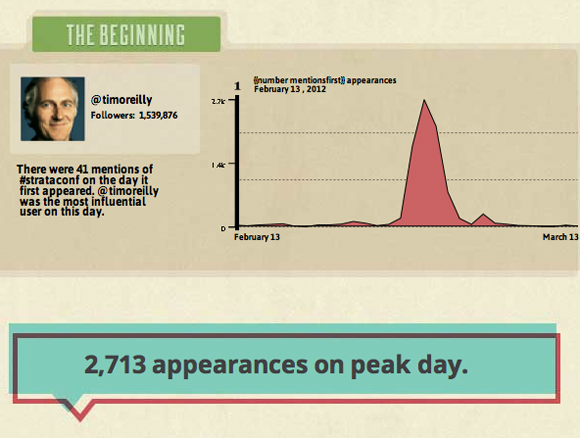 Segment from a Visual.ly Create infographic of the #stratconf hashtag.

As GigaOm’s Derrick Harris observes, it’s fairly easy to spot the limitations with this service — in the data you can use, in the templates that are available, and in the visualizations that are created. But after talking to Visual.ly’s co-founder and Chief Content Officer Lee Sherman about some “serious customization options” that are in the works, Harris wonders if a tool like this could be something to spawn interest in data science:

“The problem is that we need more people with math skills to meet growing employer demand for data scientists and data analysts. But how do you get started caring about data in the first place when the barriers are so high? Really working with data requires a deep understanding of both math and statistics, and Excel isn’t exactly a barrel of monkeys (nor are the charts it creates).”

Could Visual.ly be an on-ramp for more folks to start caring about and playing with data?

“By making City data more accessible to the public secures San Francisco’s future as the world’s first 2.0 City,” said Lee in an announcement. “It’s only natural that we move our Open Data platform to the cloud and adopt modern open interface to facilitate that flow and access to information and develop better tools to enhance City services.”

The city’s Chief Innovation Officer Jay Nath told TechCrunch that the update to the website expands access to information while saving the city money.

The personal analytics of Stephen Wolfram

“One day I’m sure everyone will routinely collect all sorts of data about themselves,” writes Mathematica and Wolfram Alpha creator Stephen Wolfram. “But because I’ve been interested in data for a very long time, I started doing this long ago. I actually assumed lots of other people were doing it too, but apparently they were not. And so now I have what is probably one of the world’s largest collections of personal data.”

And what a fascinating collection of data it is, including emails received and sent, phone calls made, calendar events planned, keystrokes made, and steps taken. Through this, you can see Wolfram’s sleep, social, and work patterns, and even how various chapters of his book and Mathematica projects took shape.

“The overall pattern is fairly clear,” Wolfram writes. “It’s meetings and collaborative work during the day, a dinnertime break, more meetings and collaborative work, and then in the later evening more work on my own. I have to say that looking at all this data, I am struck by how shockingly regular many aspects of it are. But in general, I am happy to see it. For my consistent experience has been that the more routine I can make the basic practical aspects of my life, the more I am able to be energetic — and spontaneous — about intellectual and other things.”