When it comes to government IT in 2013, GitHub may have surpassed Twitter and Facebook as the most interesting social network.

GitHub’s profile has been rising recently, from a Wired article about open source in government, to its high profile use by the White House and within the Consumer Financial Protection Bureau. This March, after the first White House hackathon in February, the administration’s digital team posted its new API standards on GitHub. In addition to the U.S., code from the United Kingdom, Canada, Argentina and Finland is also on the platform.

“We’re reaching a tipping point where we’re seeing more collaboration not only within government agencies, but also between different agencies, and between the government and the public,” said GitHub head of communications Liz Clinkenbeard, when I asked her for comment.

Overall, 2012 was a breakout year for the use of GitHub by government, with more than 350 government code repositories by year’s end. 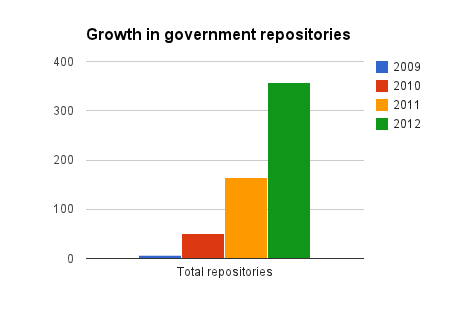 In January 2012, the British government committed the code for GOV.UK to GitHub.

NASA, after its first commit, added 11 more code repositories over the course of the year.

In September, the new Open Gov Foundation published the code for the MADISON legislative platform. In December, the U.S. Code went on GitHub.

GitHub’s profile was raised further in Washington this week when Ben Balter was announced as the company’s federal liaison. Balter made some open source history last year, when he was part of the federal government’s first agency-to-agency pull request. He also was a big part of giving the White House some much-needed geek cred when he coded the administration’s digital government strategy in HTML5.

Balter will be GitHub’s first government-focused employee. He won’t, however, be saddled with an undecipherable title. In a sly dig at the slow-moving institutions of government, and in keeping with GitHub’s love for octocats, Balter will be the first “Government Bureaucat,” focused on “helping government to do all sorts of governmenty things, well, more awesomely,” wrote GitHub CIO Scott Chacon.

Part of Balter’s job will be to evangelize the use of GitHub’s platform as well as open source in government, in general. The latter will come naturally to him, given how he and the other Presidential Innovation Fellows approached their work.

“Virtually everything the Presidential Innovation Fellows touched was open sourced,” said Balter when I interviewed him earlier this week. “That’s everything from better IT procurement software to internal tools that we used to streamline paperwork. Even more important, much of that development (particularly RFPEZ) happened entirely in the open. We were taking the open source ethos and applying it to how government solutions were developed, regardless whether or not the code was eventually public. That’s a big shift.”

Balter is a proponent of social coding in the open as a means of providing some transparency to interested citizens. “You can go back and see why an agency made a certain decision, especially when tools like these are used to aid formal decision making,” he said. “That can have an empowering effect on the public.”

Forking code in city hall and beyond

There’s notable government activity beyond the Beltway as well.

The City of Chicago is now on GitHub, where chief data officer and city CIO Brett Goldstein is releasing open data as JSON files, along with open source code.

Both Goldstein and Philadelphia chief data officer Mark Headd are also laudably participating in conversations about code and data on Hacker News threads.

“Chicago has released over 400 datasets using our data portal, which is located at data.cityofchicago.org,” Goldstein wrote on HackerNews.

While Goldstein says that the city’s portal will remain the primary way they release public sector data, publishing data on GitHub is an experiment that will be interesting to watch, in terms of whether it affects reuse.

“We hope [the datasets on GitHub] will be widely used by open source projects, businesses, or non-profits,” wrote Goldstein. “GitHub also allows an on-going collaboration with editing and improving data, unlike the typical portal technology. Because it’s an open source license, data can be hosted on other services, and we’d also like to see applications that could facilitate easier editing of geographic data by non-technical users.”

Headd is also on GitHub in a professional capacity, where he and his colleagues have been publishing code to a City of Philadelphia repository.

“We use [GitHub] to share some of our official city apps,” commented Headd on the same Hacker News thread. “These are usually simple web apps built with tools like Bootstrap and jQuery. We’ll be open sourcing more of these going forward. Not only are we interested in sharing the code for these apps, we’re actively encouraging people to fork, improve and send pull requests.”

While there’s still a long road ahead for widespread code sharing between the public and government, the economic circumstances of cities and agencies could create the conditions for more code sharing inside government. In a TED Talk last year, Clay Shirky suggested that adopting open source methods for collaboration could even transform government.

A more modest (although still audacious) goal would be to simply change how government IT is done.

“I’ve often said, the hardest part of being a software developer is training yourself to Google the problem first and see if someone else has already solved it,” said Balter during our interview. “I think we’re going to see government begin to learn that lesson, especially as budgets begin to tighten. It’s a relative ‘app store’ of technology solutions just waiting to be used or improved upon. That’s the first step: rather than going out to a contractor and reinventing the wheel each time, it’s training ourselves that we’re part of a larger ecosystem and to look for prior art. On the flip side, it’s about contributing back to that commons once the problem has been solved. It’s about realizing you’re part of a community. We’re quickly approaching a tipping point where it’s going to be easier for government to work together than alone. All this means that a taxpayer’s dollar can go further, do more with less, and ultimately deliver better citizen services.”

Some people may understandably bridle at including open source code and open data under the broader umbrella of “open government,” particularly if such efforts are not balanced by adherence to good government principles around transparency and accountability.

That said, there’s reason to hail collaboration around software and data as bonafide examples of 21st century civic participation, where better platforms for social coding enable improved outcomes. The commits and pulls of staff and residents on GitHub may feel like small steps, but they represent measurable progress toward more government not just of the people, but with the people.

“Open source in government is nothing new,” said Balter. “What’s new is that we’re finally approaching a tipping point at which, for federal employees, it’s going to be easier to work together, than work apart. Whereas before, ‘open source’ often meant compiling, zipping, and uploading, when you fuse the internal development tools with the external publishing tools, and you make those tools incredibly easy to use, participating in the open source community becomes trivial. Often, it can be more painful for an agency to avoid it completely. I think we’re about to see a big uptick in the amount of open source participation, and not just in the traditional sense. Open source can be between business units within an agency. Often the left hand doesn’t know what the right is doing between agencies. The problems agencies face are not unique. Often the taxpayer is paying to solve the same problem multiple times. Ultimately, in a collaborative commons with the public, we’re working together to make our government better.”