The revolution in biology is here, now

Biological products have always seemed far off. BioFabricate showed that they're not. 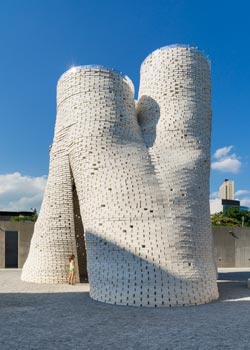 Installation view of The Living’s Hy-Fi, the winning project of The Museum of Modern Art and MoMA PS1’s 2014 Young Architects Program. Photograph by Kris Graves.

The BioFabricate summit in New York rearranged my thinking. BioFabricate was about the intersection of manufacturing and biology: not just “we can make cool new microbes,” but using biology to manufacture products for the real world. Biological products have always seemed far off. But they’re not: the revolution in biology is clearly here now, just unevenly distributed.

What I saw, instead, was real products that you might never notice. Bricks made from sand that are held together by microbes designed to excrete the binder. Bricks and packing material made from fungus (mycelium). Plastic excreted by bacteria that consume waste methane from sewage plants. You wouldn’t know, or care, whether your plastic Lego blocks are made from petroleum or from bacteria, but there’s a huge ecological difference. You wouldn’t know, or care, what goes into the bricks used in the new school, but the construction boom in Dubai has made a desert city one of the world’s largest importers of sand. Wind-blown desert sand isn’t useful for industrial brickmaking, but the microbes have no problem making bricks from it. And you may not care whether packing materials are made of styrofoam or fungus, but I despise the bag of packing peanuts sitting in my basement waiting to be recycled. You can throw the fungal packing material into the garden, and it will decompose into fertilizer in a couple of days.

Another big insight was that the raw material for biological products is frequently waste. The microbes that make plastic use methane released by sewage plants and farms; the fungi used in bricks and packing material feed on corn stalks. Humans aren’t very good at recycling; nature does nothing but recycle. What if excess methane could be used productively? The economics of waste removal could change completely.

We can’t be naive about the environmental impact of our actions. We’ve seen a couple decades of “greenwashing,” in which almost anything can be labelled “green,” regardless of whether it was environmentally harmful or not. Jenn van der Meer (@reason_street) spoke about the need to look at a product’s entire lifecycle: how it’s made, how it’s delivered, how it’s used, how it’s disposed of. Corn-based biofuel sounds good, but it is an ecological disaster. Will the products discussed at BioFabricate fare better? It’s certainly possible that there’s an ecological drawback to, say, fungal packing material that we haven’t yet investigated. The attendees’ agreement that innovators needed to make a total assessment of a product’s lifecycle, from creation to disposal, was striking. I can’t imagine that agreement in any other industry.

We won’t do justice to the potential of biology until the tools reach the point where you don’t need a PhD to do interesting work.

Several people spoke about their work as “collaboration with biomaterial.” This is a unique and exciting perspective. In computing, we write programs that make computers do things. If the program doesn’t do what we want, we’ve made a mistake. We driving the process: the machine always does what it’s told. In electronics, we assemble parts that, again, do what we want (or not); they have no will of their own. We make things out of metal and concrete by bending and pouring. The metal never decides how to be bent, and the concrete never decides how to pour. Biology is fundamentally different. Biology has been creating and building for billions of years. Its creativity is quite distinct from human creativity; it has evolved extraordinarily efficient systems. So, it’s an act of hubris to talk about designing biological systems. We need to collaborate with biological systems and enable them to design themselves. We need to let them teach us what they are able to do, and build around that. Otherwise, fungus is just a bunch of mushrooms. Maybe tasty, but not a building material.

Finally, I can’t ignore the tools. Tim Gardner of Riffyn started the day, followed by Microsoft Research and Autodesk. The revolution in biology is pre-conditioned on a revolution in tools. Can we design tools that make it as easy to work with biological systems as with software, or even physical (electronic or mechanical) systems? The tools revolution is in full swing, whether it’s programming languages and design tools for experiments (Antha, Riffyn), new programming languages and design tools for the DNA itself (under way at Microsoft and Autodesk), or tools to automate data collection and experimentation. We won’t do justice to the potential of biology until the tools reach the point where you don’t need a PhD to do interesting work.

I have made the mistake of seeing the biological revolution as something yet to come, something we see glimpses of, but that’s still in the future. That’s wrong. It’s here, now. And it will be evenly distributed. After all, biology is very good at distribution.

For more on topics related to bioengineering, DIY bio, and synthetic biology, download your free copy of the latest edition of BioCoder.