Overfocus on tech skills could exclude the best candidates for jobs

Is the unemployment problem about a lack of qualified applicants in the workforce?

At the second RailsConf, David Heinemeier Hansson told the audience about a recruiter trying to hire with “5 years of experience with Ruby on Rails.” DHH told him “Sorry; I’ve only got 4 years.” We all laughed (I don’t think there’s anyone in the technical world who hasn’t dealt with a clueless recruiter), but little did we know this was the shape of things to come.

Last week, a startup in a relatively specialized area advertised a new engineering position for which they expected job candidates to have used their API. That raised a few eyebrows, not the least because it’s a sad commentary on the current jobs situation.

On one hand, we have high unemployment. But on the other hand, at least in the computing industry, there’s no shortage of jobs. I know many companies that are hiring, and all of them are saying they can’t find the people they want. I’m only familiar with the computer industry, which is often out of synch with the rest of the economy. Certainly, in Silicon Valley where you can’t throw a stone without hitting a newly-funded startup, we’d expect a chronic shortage of software developers. But a quick Google search will show you that the complaint is widespread: trucking, nursing, manufacturing, teaching, you’ll see the “lack of qualified applicants” complaint everywhere you look.

END_OF_DOCUMENT_TOKEN_TO_BE_REPLACED 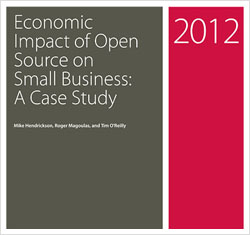 END_OF_DOCUMENT_TOKEN_TO_BE_REPLACED

Information related to the 12/20/11 episode of O'Reilly Radar.

Access the script and associated links from the December 20, 2011 edition of O'Reilly Radar. Featuring: Why Amazon’s Kindle Lending Library is a bad deal for publishers, the arrival of indoor navigation, and Reid Hoffman on how technology can create jobs.

The battle for the Internet's points of control requires amassing talent.

Consistent with the recent flurry of articles about hiring wars, many platform companies have increased their number of job postings. Winning the battle for the Internet's points of control requires amassing talent.

Amazon's cloud platform still the largest, but others are closing the gap

Measured in terms of (U.S.) job postings, Amazon's Cloud Computing platform is still larger than Google's App Engine. What's interesting is that the gap has closed over the past year.

The US Online Job Market Improved Slightly in July

Measured in terms of online job postings, the U.S. job market† improved slightly in July. This blog entry shows two views of the number of job postings per day: note the slight uptick in July 2009 in both graphs. The worst year-over-year decline occurred in April, the online job market subsequently shed less postings in May and June. Given that July was an improvement over May/June, one would hope that the stage is set for a sustained upward trend.

Updating my post from early June, the U.S. online job market still hasn’t shown signs of recovering from steady declines that began in September of last year. Compared to the same period last year, there were 50% less job postings in June 2009.

The Economic Crisis and the US Online Job Market

In my previous post, I noted that despite the large decline in total number of job postings, the number Hadoop/MapReduce job postings increased by 49%. What is the current state of the online job market? The financial crisis that began in the Fall of 2008 has had a lasting negative effect on the U.S. online job market. Since late 2008, there have been significantly less jobs posted online.