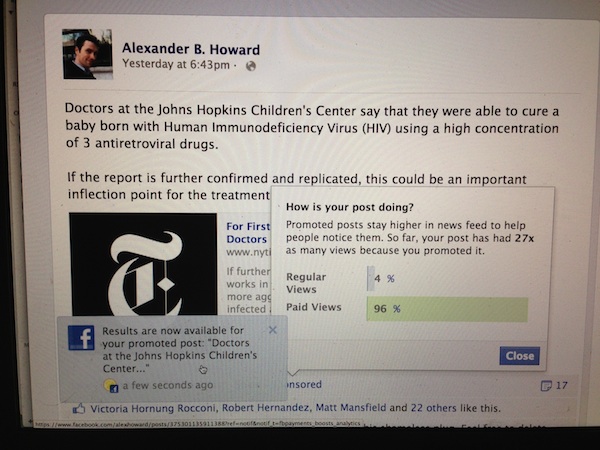 While I couldn’t find Harris on Facebook, Diana said with “some certainty” that she was my follower, “in order to have seen your content.” Harris definitely isn’t my friend, and while she may well be one of my followers, I have no way to search them to determine whether that’s so.

In these situations, “sponsored” is the label you’ll see on promoted posts, Diana explained. She also confirmed to me that anyone can (or will be able to) sponsor/promote the public post of someone else, “if they are following them or are friends with them.”

If that happens, the sponsored post will then be boosted only to friends of its author, as opposed to an entire network of followers, said Diana. In the United States, she said that will cost about $7. If this is broadly rolled out, it will be interesting to see if PR companies or news outlets quietly opt to boost stories.

What this all seems to herald is a broader move where getting seen on Facebook will depend much more upon your willingness to pay for it. This is, of course, the dynamic that has long existed on radio and television, unless you can earn “free media” coverage by being newsworthy.

Given the recent kerfluffle over the cost of sharing on Facebook and criticism of the Facebook newsfeed, issues around algorithmic transparency only seem to be growing.

While Facebook posted a “fact check” in response to Nick Bilton’s New York Times column, arguing that “overall engagement on posts from people with followers has gone up 34% year over year,” my experience on the platform matches his: even with nearly 100,000 subscribers, my updates aren’t receiving anywhere close to as much engagement as they did before last November.

Given the reactions I’ve seen to his column, I believe that Bilton speaks for many journalists and others who have turned on subscribers, along with quite a few Page owners. What we see on Facebook is now driven not just by what our friends and family share but how we and others respond to it, as interpreted by algorithms, along with our interests, expressed by Likes, and the social networking giant’s need to make money.

I remember quite clearly when this shift began, on November 3, 2012. WolframAlpha analytics told me that an update with a screencap and annotation of Facebook’s prompt to “pay to promote” received the most comments of any picture in 2012. 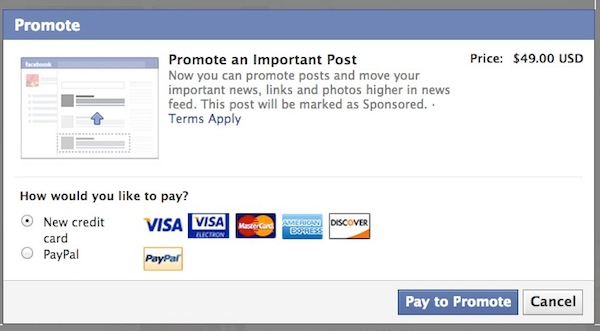 My feeling last November was that paid promotions would result in my updates becoming deprecated in the newsfeeds of others. Feelings, however, have to be balanced with data. Recent research suggests that, like most users, I have underestimated the audience size for my posts.

A new study (PDF) by the human-computer interaction group at Stanford University’s computer science department and Facebook’s data science team found that a median Facebook user reaches 60% of his or her friends over the course of a month.

I’m not sure if making public updates sponsorable will fundamentally change how we use or experience the world’s biggest social network. Will having followers promote posts degrade your relationships with friends or your interactions with them? Does it create an incentive to be nicer to them? Perhaps the latter, but the rest of it seems uncertain.

What does seem clear is that, over the past five months, Facebook users have been seeing fewer updates from friends and more content targeted to their “Likes.” This now include updates containing links or ads regarding products, services, causes or politicians that their friends “Like” elsewhere online.

Given that Facebook is a public company that provides a free, advertising-supported product and needs to grow its revenues, these changes aren’t surprising. That said, these changes feel like one more step away from the clean, uncluttered network I joined in 2007 to privately share details about my life with friends and family.

If this new pay-to-promote feature catches on with brands and corporations, they will have a quietly effective new means to influence us through our friends. I still find Facebook valuable, but my relationship status with Facebook is now set to “it’s complicated.”