The O'Reilly Radar Podcast: Tim Gardner on the synthetic biology landscape, lab automation, and the problem of reproducibility.

Editor’s note: this podcast is part of our investigation into synthetic biology and bioengineering. For more on these topics, download a free copy of the new edition of BioCoder, our quarterly publication covering the biological revolution. Free downloads for all past editions are also available.

Tim Gardner, founder of Riffyn, has recently been working with the Synthetic Biology Working Group of the European Commission Scientific Committees to define synthetic biology, assess the risk assessment methodologies, and then describe research areas. I caught up with Gardner for this Radar Podcast episode to talk about the synthetic biology landscape and issues in research and experimentation that he’s addressing at Riffyn. 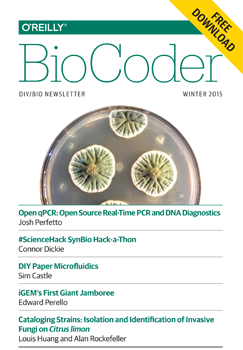 Among the areas of investigation discussed at the EU’s Synthetic Biology Working Group was defining synthetic biology. The official definition reads: “SynBio is the application of science, technology and engineering to facilitate and accelerate the design, manufacture and/or modification of genetic materials in living organisms.” Gardner talked about the significance of the definition:

“The operative part there is the ‘design, manufacture, modification of genetic materials in living organisms.’ Biotechnologies that don’t involve genetic manipulation would not be considered synthetic biology, and more or less anything else that is manipulating genetic materials in living organisms is included. That’s important because it gets rid of this semantic debate of, ‘this is synthetic biology, that’s synthetic biology, this isn’t, that’s not,’ that often crops up when you have, say, a protein engineer talking to someone else who is working on gene circuits, and someone will claim the protein engineer is not a synthetic biologist because they’re not working with parts libraries or modularity or whatnot, and the boundaries between the two are almost indistinguishable from a practical standpoint. We’ve wrapped it all together and said, ‘It basically advances in the capabilities of genetic engineering. That’s what synthetic biology is.'”

Riffyn is a lab automation company that was born out of Gardner’s 20 years working in biotech and his frustrations with the experimentation process, and the non-transparency and mythical lore that exists in labs. He explained how his engineering background is informing solutions to these problems:

“The problem is there’s an oral tradition in labs of how information is kept, transferred, and taught. It’s much more like apprenticeship in a blacksmith shop than like a precision engineering and training operation. It’s not like that uniformly, it varies, but there is a sense of that. … This problem is widespread. I called 50 different labs and companies…They all had the same problems. … Ryffin’s goal is to bring the solution to problems of noise and experimentation to as many people as we possibly can, and the solution is derived from manufacturing. Manufacturing has been solving this problem for years. It became very well understood and popularized starting in the 1950s in the auto industry and has spread — just about every field of manufacturing uses these principles.

“It’s just quality systems engineering, and it’s esoteric to the average person in the R&D environment; I wouldn’t expect them to understand it, but it doesn’t mean it’s not valuable. Our goal is to figure out how to bring that to a scientist without inflicting the pain of having to spend a whole career understanding it. That’s our challenge: how do you bring the goodness of quality without the constraints that might be applied in a manufacturing site, how do you free them to be creative, exploratory, and reactive to the information that you get in a laboratory environment but also maintain the quality that you get in a very linear manufacturing environment, and I think we can do that with software.”

The problem of reproducibility is coming to the forefront of discussions in the scientific community. Gardner said the problem itself isn’t difficult and that the solution lies in improved education and a change in culture:

“It’s not difficult. [It just] doesn’t happen by itself. [Experiments are] not going to be reproducible automatically. You have to actually engineer them to be reproducible. What makes it difficult is nobody knows how to do that because they’ve never been taught . … It’s literally like if you’ve never played basketball before and somebody asks you to dribble a ball and score some baskets, it’s going to be hard to do. … From a technical perspective, obstacles are the lack of blueprints of how experiments are done. … Step number one, if you want quality, you have to write down what you did in a way that’s unambiguous. Step number two, you have to collect and aggregate all the data on how that performs from a variety of instruments and formats into one place so that you can statistically analyze it across weeks and months and years. That never happens because people basically copy and paste stuff into spreadsheets and manually aggregate it from time to time. It’s just too hard with the tool sets that are out there to do that.

“There’s also an incentive structure that breeds a culture in science where the only thing that’s rewarded is talking about your science, which means it doesn’t actually have to work; you just have to be able to present it and talk about it in a way that gets people excited. There’s no incentive, there’s no supply chain where you are punished by your customers for producing a product that doesn’t work. All you do is get rewarded for more publications in the higher profile journals, and in that world, there’s no reason to try to make your experiments reproducible because nobody really has to reproduce them. … There’s no peer pressure to deliver. Fortunately, that’s changing for a number of reasons, and I’m really excited about those changes.”

Gardner noted that the problem isn’t really worse now, there’s just more noise. “How many articles got published per year in 1850? What, 100?,” he pointed out. “You could really focus on those few results, and you could make sure those results were scrutinized to death. Even then, there was irreproducibility.”

Much like in the artificial intelligence arena, there’s a benefits-versus-dangers controversy in synthetic biology. Gardner weighed in with his opinion:

“Anything can be used in a nasty way, even water for torture as we have heard so much about. Anything can be used in a life-giving way. Water can grow crops. It can save us when we’re thirsty. It can do all kinds of amazing things. It can give us power. To think of water as good or bad is so absurd that you and I both look at that and say, ‘What are you talking about? Who would talk about water that way?’

“It’s the same thing with genetics and genes. You can’t talk about whether it’s all good or it’s all bad. … Yeah, we’ve got to be cognizant of the ways that it can be used improperly, just like you can break into Sony and steal secrets and display them on the web through computer hacking, using computers improperly. You can use synthetic biology in an improper way that is not productive to a human society, but you can use it in a million times more ways that are productive to society, and it’s those productive ways that need to be the focus of our research and our efforts. At the same time, we need people to be aware and create structures that can protect us for the potential bad ways to use it.”

The emerging DIY aspects of synthetic biology don’t worry Gardner, either. People get “jazzed up,” he said, because of the self-replicating nature of biology, as depicted in movie disaster scenarios in which a virus takes over the world, killing everyone. “We don’t have the ability to do that right now, and it’s incredibly hard — and there are incredible balancing process in nature that fight those kinds of things as well,” he said. “It’s much more complicated than that; I don’t worry about that kind of thing happening, but it doesn’t mean we should close our eyes to the risks — we should always pay attention to those.”

You can listen to the podcast in the player embedded above or download it through SoundCloud or iTunes.